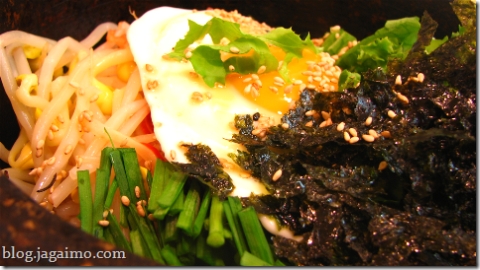 I don't know what possessed me to go to Lotte World, the megalithic shopping center, in Jamsil, complete with indoor ice skating rink and a shooting range. But I did, and of course, I needed lunch.

While touring the food-laden Lotte department store basement section, I acquired some very nice artisanal gochujang, dwaenjang, and ssamjang, which may be responsible for my sudden urge to eat dol sot bibimbap.

But I walked over acres (hectares?) of shopping madness before deciding to do that, narrowly escaping a Disneyland-like hell of a parallel universe constructed inside the 3rd floor of one of the Lotte World buildings meant to resemble a traditional Korean village. When I saw photos outside the entrance featuring bizarre cartoon-like characters in big-headed costumes, I realized that this particular tourist trap was not for me.

And so I moved on in search of food.

As it turns out, most of the building suffers from the same chain-driven mediocrity that any other big shopping mall in the world aspires to, complete with TGI Friday's and KFC and Lotteria. But it looks like it's possible to eat a decent meal even in the cafeteria-like sections of the complex. One of said cafeterias was where I ended up.

You can walk around the cafeteria perusing short menus, then you place your order at a counter in center of things that serves as a hub. The cashier dispatches your order to the appropriate shop electronically. When your number appears on a mechanical sign, you go to the appropriate vendor and pick it up.

My dolsot bibimbap dispatched with the conventional raw egg in favor of a partially cooked one. That may be because they don't heat up the dolsot well enough to completely cook the egg as you stir it into the rice and vegetable mixture. The flavor was respectable, but I've actually had a better, spicier dolsot bibimbap in a department store basement quick-service restaurant in Japan. In a pinch, it works, but I prefer to eat this kind of thing at a small mom & pop place in a decaying old building.