Sunday night in Seoul I was on my own, and incredibly jetlagged. After visiting a pottery gallery, I briefly met with a friend in Gangnam station, then I went back to my hotel near Seoul National University of Education to rest a bit... I researched some dining options, but most of the interesting ones required traveling 30 minutes or more across town and perhaps a bit more careful navigation than I was able to handle with my level of energy.

I was mostly inclined to sleep, but I was getting pretty hungry.

So I walked in the area surrounding my hotel for 20 or 30 minutes, and found a little place whose menu promised nokdu-jeon, a pancake made from shelled, ground mung beans. As I've mentioned before, I'm a sucker for jeon, so I went right inside. 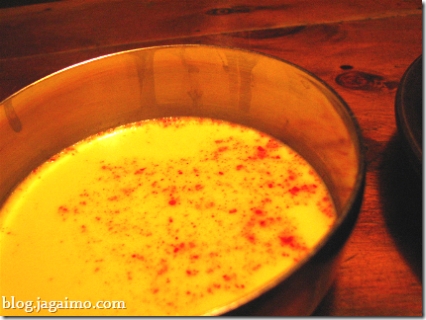 They presented a few small side dishes, included a plain savory steamed custard, which we also had at a Gangnam station-area drinking establishment we visited on Saturday night.

These had a chewier than usual texture, so it's possible they snuck some meat inside, but I didn't recognize which one. The most common preparation of nokdu-jeon or binddaeddeok, as far as I can tell, is actually sans-meat, though many restaurants specializing in binddaeddeok serve some seasoned oysters or similar savory ingredients atop the pancakes in place of a dipping sauce.

They were pleasingly crispy on the outside, but overall I wasn't as excited by these nokdu-jeon as I usually would be. 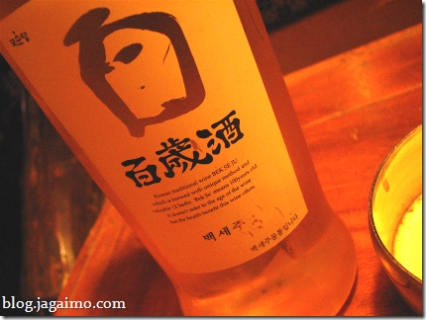 I figured, since the place I was in was mostly a drinking venue, the polite thing to do was to order something to drink with dinner. I had noticed they had o-sip seju on the menu when I was standing outside. I really like the basic flavor notes of baek seju, which is an herbal liqueur based on soju, but I find it a bit too sweet on its own.

Baek means 100 in Korean, and o-sip means 50. Baek-seju is therefore "diluted" with higher-alcohol, lower sugar soju in a 1:1 ratio.

That would suit me fine. Or so I thought.

It didn't occur to me that ordering such a thing means I was, for all practical purposes, ordering two full 500 ml bottles of soju. And I was by myself. Oops.

I didn't drink the whole thing. In fact, I barely made a dent, although I think I had about 300 ml in total. In terms of alcohol content, That's probably the equivalent of most of a bottle of New World red wine, which I am unlikely to consume in a typical evening. But I was jetlagged... it wasn't a typical evening.

Though I was still quite functional, falling asleep that night was no problem.