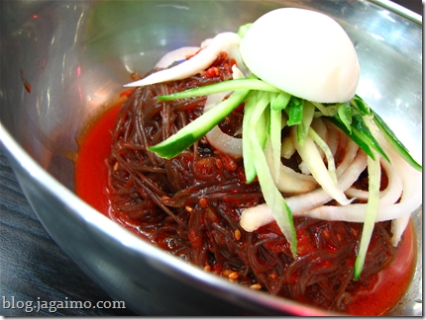 One of my lunches in Seoul... These chewy, stretchy long noodles made in part from buckwheat (like soba) but with a very distinctive texture are known as reimen in Sendai, Japan, where a local version is quite popular. In Korea, the most popular preparation is mul naengmyeon, which is made with a chilled, slightly acidic and fairly refreshing un-beefy beef broth.

On a previous trip, I didn't even know I was being served something made with a beef broth because the friend who took me out for lunch on that occasion didn't know how they were made, and the beef flavor is deceptively subtle when the dish is served cold.

Bibim-naengmyeon is essentially ovo-vegetarian, but it is typically served with a warm version of that broth, generally without the vinegar that marks mul naengmyeon, on the side. Various shredded vegetables may be added to the top, and a spicy sauce most likely based on gochujang adds a big burst of flavor to the whole thing.

Note: The precision geek in my wants to write the name of this dish as "bibim-naengmyeon", which is closer to the actual Hangeul characters used, but typical Korean slurring makes the word sound closer to "bibim-naengmyun," which is probably the most conventional rendering in English romanization.