Rabokgi is the derelict pot-smoking cousin of ddeokbokgi, the ubiquitous Korean stewed glutinous rice cake dish. Ramyun (instant ramen), glutinous rice cakes, and spicy gochujang are the essential components in rabokgi; in this case, ours were served with a hard-boiled egg and some variety of fried hanpen, or fish cake, which is called odeng in Korean. I left the odeng for Hiromi.

Normally this is food that accompanies a late night round of drinking, but Hiromi and I didn't have any opportunity to do that before her Sunday morning departure to Tokyo. She had been craving it the entire trip, but we were so full from our three substantial meals on Saturday that even our shared hoddeok was pushing the limits of our stomach capacity.

It turns out, though, that a small restaurant in a building adjacent Gangnam express bus station not only offered rabokgi, but was open at 8am. So not all hope was lost...

We then had a small challenge getting the attention of the waitstaff (I was too polite), but service was quick, and we had this unlikely breakfast. If, however, we had been up all night drinking, like some ajeossi (middle-aged men) at the 24-hour kamja-tang restaurant who we spotted drinking soju with their stew at 7 am Saturday, it might have just been par for the course.

We did, however, observe a small part of the ritual after dinner at Pulhyanggi. 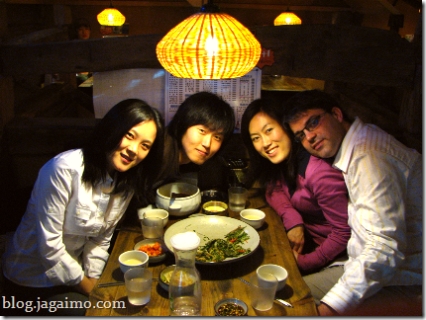 We met with a friend of ours who had studied in Seattle and his sister for a little makgeolli.

Makgeolli, sometimes rendered makkori, is sort of what beer would be if it were made from rice instead of barley or wheat, and devoid of hops. It's creamy white, and served with a ladle.

We were completely stuffed from our previous dining excesses, but this nice vegetable jeon was available for those needing a snack. I managed only a bite or two, but I wish I could have managed more. I'm a sucker for good jeon. (I'll try to remember what the highlighted vegetable was at some point and post a trivial update later). 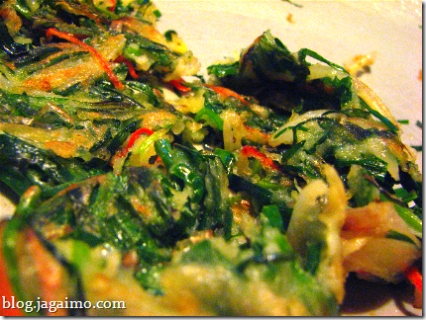