Unlike Tokyo, Seoul still has a vibrant street merchant scene. Every subway station seems to have a few ajumma peddling some sort of medicinal mountain vegetable, bottles of some morning drinking yogurt concoctions, and the occasional roll of gimbap. The average newsstand/kiosk has a pile of popcorn or puffed barley snacks ready for the taking. And some stretches of sidewalk have an endless series of ddeokbokgi, odeng and skewered meat yatai.

In some cases, places housed in permanent buildings open up right out into the street, and these offer the best of both worlds: fresh, inexpensive street food, and access to refrigeration and handwashing facilities. 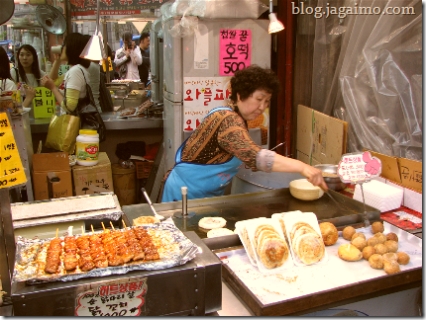 We happened on this shop, where an efficient ajumma was constantly preparing fresh hoddeok while taking orders, exchanging money, and serving a steady stream of customers. 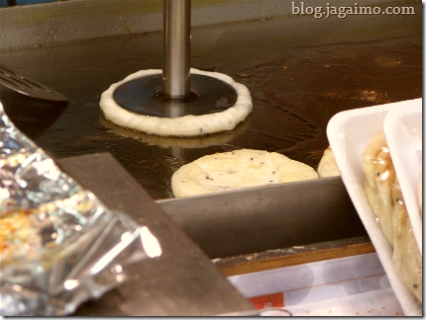 You must have hoddeok at least once when visiting Korea. Essentially a yeasted pancake stuffed with brown sugar, often featuring peanuts, walnuts or sesame seeds, they are occasionally flavored with green tea or other ingredients. I'm almost always most impressed by the simplest versions. These are sold in molten form straight from the grill by various street vendors. Some use a flat teppan style griddle and a flat metal tamper, and a few use gas-powered waffle-iron-like contraptions that press the pancakes flat as they bake.

Assembling the next order

Each hoddeok gets a very brief rest at the side of the grill, but orders come in so fast that they still reach your little hands in a tempting but dangerously hot state.

The brown sugar-cinnamon filling bleeds right out of the broken pancake.