For some reason I get wistful whenever I think of the various ningyo-yaki (shaped waffles typically stuffed with sweet bean paste) and dora-yaki I have eaten on my many trips to Japan. From a highway service area or a department store basement, fresh, warm ningyo-yaki are impossible to resist.

Maybe they speak to my inner child.

Maybe it's just the sugar rush.

Well, I don't have a taiyaki (fish shaped) waffle pan in my otherwise well-stocked kitchen, so at home I have to settle for dorayaki, the pancake-like equivalent. These are often served cold, but they're even better just a few minutes off the stove. You can make a batch of them and keep them in the refrigerator as an afternoon indulgence for up to 3 or 4 days.

I also don't have pancake rings or an electric griddle, so my dorayaki end up being the size of my smallest nonstick omelet pan. That means mine need to be cut up into quarters for individual servings, or perhaps folded, if i used a thinner batter. 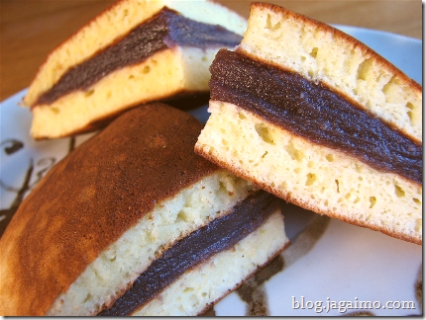 Dorayaki aren't exactly the same thing as the pancakes you'd slather with syrup. The American pancake is, by itself, not distinctly sweet; it typically only has enough sugar to make the pancakes brown nicely. Every dorayaki recipe I've seen, on the other hand, is full of sugar or honey, and distinctly heavier-handed with eggs. That's partially because the fillings are a bit less sweet than the typical syrup topping, and partially because this is a snack rather than a breakfast item.

Mine are sweeter than normal American pancakes, but not as sugary as the typical afternoon snack version that Japanese dorayaki vendors tend to produce. The key is to eat them in much smaller quantities than you might eat pancakes... they're heavier than they look.

Measuring things precisely is still sort of anathema to me, but I used about 3 egg yolks, one whole egg, 2/3 cup buttermilk, a shy teaspoon of baking soda, about 5 ounces (by weight) of all-purpose flour, maybe a tad less than 1 cup. Cake flour might be better, but I never keep it around.  You'll also need two tablespoons vegetable oil, a few tablespoons of honey, and a generous pinch of salt. The batter needs to be mixed until lumpy, like regular pancakes; it's easiest if you mix all the liquid ingredients first.

Recipes in Japanese vary widely. Some use all sugar, some use sugar and honey, some are all honey, and some incorporate mirin. Some are lighter and fluffier, some are thinner and aspire to be a little mochi-mochi (chewy, but not tough). Almost none use buttermilk; if you only have regular milk, use that, but switch to baking powder instead of baking soda.

The pancakes need to be cooked on medium-low heat with the slightest brushing of oil in the pan.

Take two pancakes and make a sandwich with them using any kind of anko, anko cream, or maybe a thick custard. I used koshi-an (finely sieved sweetened red bean paste) bought at Uwajimaya this time, but this is also good with ogura-an (coarse red bean paste), uguisu-an (mung bean paste), and probably even zunda (sweet edamame paste). If strawberries are already good where you are, consider putting a halved strawberry in there.

If you make the pancakes bigger than 3" or so in diameter, cut them into halves or quarters before serving.