Last Saturday I came home with a bundle of rhubarb, so I quickly turned it into a compot and kept it handy throughout the week.

At breakfast a few times, the simmered rhubarb found itself in a lassi or smoothie-type drink. Made with a little buttermilk, a banana, and some ice cubes, the sweet-tart concoction kickstarted my morning without my usual caffeine hit.

This morning, though, I wasn't in the mood for a liquid breakfast. That, and I really wanted coffee. It's hard to convince myself to make coffee when I'm already drinking something else.

Observant readers may have noticed a distinct surplus of bread in this week's postings... This is because the obscenely large pseudo-baguette I got from my neighborhood market (from Seattle's A La Francaise) is incredibly difficult for a single person to finish. There are other baguette options in Seattle that are sized more conventionally, but they weren't available on the night I decided I needed some bread.

Well, I finally found a way to use that last little bit of bread today.

It wasn't even a struggle... 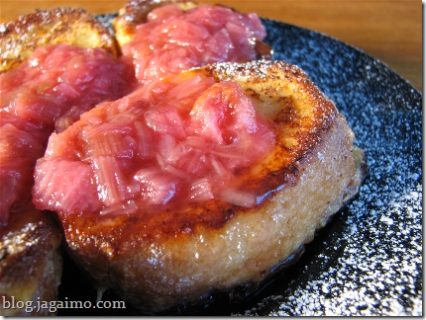 Conventionally, french toast is briefly soaked in milk then dipped in egg. I would like to have done that, but thanks to my lassi adventures earlier in the week the only dairy I had at home was buttermilk, so I used that instead.

Buttermilk pancakes aside, the possible outcome of using buttermilk in french toast concerned me slightly. Buttermilk pancakes work in part because they are typically made with baking soda, which requires acid in order to yield a leavening effect, and the reduced acid after the leavening reaction makes the pancakes aromatic but mild in flavor.

Surprisingly, the buttermilk worked quite well. I was expecting it to be excessively yogurty, but no such disaster befell me. I don't know if it's because the topping was already sour, or that even with a few minutes of soaking the percentage of buttermilk stays fairly low, or because I love sourdough french toast and some of the same flavor notes were coming out of this.

Anyway, I'd definitely make it again when confronted with excessive bread. Two stalks up.