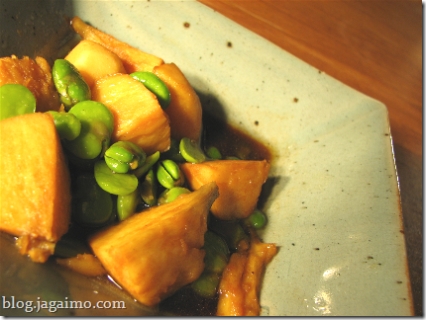 Chi goo is a slightly crunchy potato-like vegetable. It's called a "river potato" in some translations, and seems to share some textural qualities with lotus root. Apparently the name means "belly button mushrooms" in Cantonese, but it's clearly a root vegetable, sometimes called arrowhead.

I couldn't really decide what to do with these, and I lost one or two of them due to neglect.

When I finally got around to preparing them, I thought they might respond well to some leftover brown butter I had from making financiers. First boiled like potatoes, then quartered lengthwise, the chigoo are added to a pan with sizzling brown butter. After they've cooked for a minute or so, I add a serious dose of sake and moderate splash of soy sauce. When the liquid reduces substantially, I toss in some fresh blanched fava beans (soramame in Japanese) and heat them just long enough to to warm up.

Slightly salty, a little nutty, and imbued of the aroma of sake, the slightly crisp chigoo featured a hint of artichoke flavor. The dish is very simple, but serves as a nice sake accompaniment.