No, I am not a great fan of meat analogues, but every once in a while I get an odd craving for a veggie burger. Most of the frozen products are not very exciting, and they've gotten incredibly expensive in the last few years, so they're almost never on my shopping list. But I do sometimes decide to make them at home. 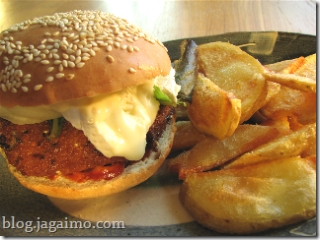 This week, I still had a substantial amount of leftover okara, the soybean mash that's a byproduct of soymilk-making, a consequence of my godoufu-making endeavors. It really has a short lifespan, so I've been doing my best to make use of it before it's too late.

Some of the okara I had went into a croquette-like dish I made last Sunday. Seasoned okara has a slightly longer lifespan than unseasoned okara, so I repurposed some of the remaining croquette base, and blended it with some of the filling from some mushroom gyoza that was also sitting in my refrigerator. I shaped the resulting mixture into patties and carefully slipped them into a deep fryer.

What goes into such a concoction as okara croquettes or okara burgers? Well, there are other options, but basically I seasoned everything with a little salt, maybe a splash of some soy sauce, some pepper, and, in this case, and some mitsuba, a Japanese herb slightly similar to flat-leaf parsley. I used a little flour, and maybe even an egg yolk, to help everything hold together. The mushrooms added a bit of aroma and flavor, and since they were repurposed from a gyoza filling, they also benefited from the garlic-like flavor of nira, a chive-like herb. 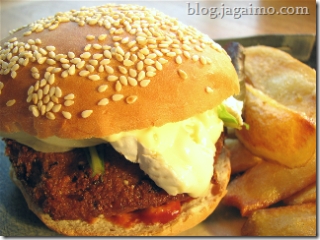 The okara burgers are, in this case, served on soymilk buns. The excessive surplus of soymilk in my refrigerator perhaps made this inevitable, but it works.

There's no way I'd be able to give a precise recipe for the okara "burgers", but a little experimentation and tasting before cooking should be enough of an indication of the likely success or failure. In this case, I deep fried them, instead of using a frying pan, but either way would work. Deep frying, counter-intuitively, absorbs less oil than using a frying pan, because the temperature is more stable.

They're served with mixed greens, onions, and brie, and the usual mayo/mustard/ketchup (corn-syrup free) condiments.

Potatoes were yukon golds, fried at a bit lower than normal temperature to keep them from browning too quickly, are twice-fried and tossed with porcini salt and a bit of additional sea salt. These would be equally nice roasted in the oven with olive oil.

The soymilk bread is reasonably simple... Unlike the okara burgers, I actually measured the ingredients, though the recipe was still fairly improvised.

Place the flour into a bowl, making an impression large enough to accommodate the soymilk. Pour the soymilk into the bowl and add the yeast. If your yeast requires it, proof it in the soymilk in that impression. Otherwise, add salt and slowly blend the milk with the flour, using small circles with a wooden spoon.

Knead for a few minutes until the dough is smooth and slightly sticky. The goal is to have a fairly moist dough for rolls, so resist the temptation to add much more flour unless the dough just doesn't hold its shape.

Allow to rise for at least an hour, then use a dough cutter to separate the dough into six equal pieces. Massage these into rounds, and use a rolling pin to make each bun a fairly even thickness, roughly 1/2 inch (1.2 cm). Allow to rise for another 20 minutes or so.

Preheat an oven to 200C (425F). Place an oven-safe pot filled with hot water in the top rack of the oven.

Brush a little soymilk or egg on top of each roll. Gently press the wet side into a plate of sesame seeds.

Bake the buns for about 25 minutes, until golden-brown on top. Remove from oven and cover with a cloth, allowing them to mostly cool before consuming.

These buns are, perhaps, a bit too chewy for a "burger" bun, but they're also quite nice as breakfast rolls. They would likely become somewhat less chewy with a touch of sugar, some egg, or added fat such as butter or olive oil.