Two asparagus dishes in a row?

Yes, but it's that time of year. I suppose there will be at least one or two more. 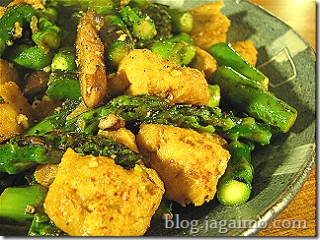 Actually, I haven't eaten asparagus all that often lately, and local asparagus hasn't quite kicked in. But most weeknights I've been too lazy to take any photos of dinner, and on weekends... well, I guess I've been lazy on weekends too. In fact, Friday night I was so lazy that, straight off the bus on the way home, I went straight to Paseo, the Cuban-ish shop in my neighborhood, and grabbed dinner to go. I almost never grab dinner to go.

Today I made a brief stop at Thanh Son Tofu, followed by some vegetable shopping at Uwajimaya. I originally had planned to make some Japanese foods, but I was really feeling weary once home... all I really wanted was a gin and tonic.

I kicked off the rice cooker, but I didn't do anything at all that would result in a Japanese dinner appearing on the table... A few minutes before the rice finished, I chopped some asparagus, scallions and garlic, sliced some shiitake, and halved some fried tofu. I prepared a very hurried porcini-konbu soup stock. A quick saute, a splash of soup stock, a little piqin chili oil, a drizzling of vegetarian oyster sauce, a few grindings of black pepper, and suddenly dinner was on the table. Not fancy, but flavorful and satisfying...