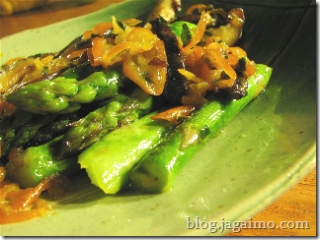 Sometimes you have to take a few risks.

Sometimes, in order to make a bit of progress at something, you almost have to invite disaster. Tonight I invited disaster home, into my kitchen. To be fair, I did it responsibly. I did minimize the number of potential victims... In spite of popular opinion to the contrary, for a passionate cook there is more than one reason to cook for oneself... taking risks is one.

Many people think me more adventurous or inventive in cuisine than I see myself. I'm perhaps obsessive, but I work within a certain vocabulary. The spectrum of flavors and techniques I work with is perhaps broader than average, especially in an age of convenience, but generally I'm quite content to work from well-understood, classic techniques and flavor combinations. Basil and tomato never gets old for me. I feel the same about ume and shiso.

I'm quite content playing with my food within familiar parameters... Although I push the boundaries often enough, usually simplicity wins out over novelty.

Sometimes I do simplicity with a little novelty.

That's all this was... I was at the supermarket tonight, and I saw kumquats for a reasonable price... I thought, "Hey! kumquats! Suddenly, I feel like cooking with kumquats."

My usual non-dessert impulse would probably be to put them into a salad or something. Then I remembered I bought asparagus a few days ago, and I really ought to use it up.

I wondered, "hmm... what can I do with kumquats and asparagus?"

Well... citrus... butter... it works for artichokes, why not asparagus? Lemon, kumquat, close enough, right? Hollandaise sauce can be made with lemon juice, and asparagus likes hollandaise... Ah, that settles it.

So I sort of simmered the kumquats in way too much butter for several minutes to mellow them out, and added a bit of salt. I tossed in a few slices of shiitake because they were handy, and I had nothing better to sacrifice them to. Later, I added the asparagus, tossed them around in the pan a bit, and covered them for a few minutes. I added some nira (sometimes called garlic chives). After adjusting seasoning a bit, I pronounced the dish done.

It worked. It turned out to be a good combination. The shiitake proved to be more a distraction than anything else, but I'll definitely be repeating the kumquat butter combination, and since asparagus season is just kicking off, I have a feeling the trio will be back in my life soon.