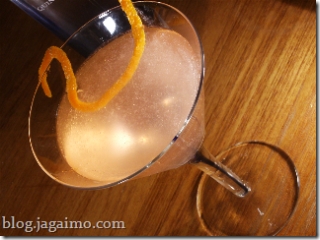 I promise: This is not one of those fruity, syrupy drinks masquerading as a martini. No, it's not traditional, but it's also only the slightest departure from the standard martini.

Seville oranges, also known as bitter oranges, don't seem to be tremendously juicy... at least not this time of year. I know the flavor well, but this is the first time to play with the fresh fruit. In Japan I've also encountered daidai, which are somewhat similar, but I remember them as smaller.

I'm quite happy with an old-school martini, which to me means gin AND vermouth. I don't understand the "dry vodka martini" cult, because it seems to me just to be an excuse to put straight vodka in a pretty glass.

Shaken or stirred? I'm not religious about that... I usually shake, which tends to make for a somewhat cloudy martini thanks to all of those ice crystals, but it still tastes nice.

The drink is 2 scant shots Quintessential Gin (complex but not very intense; a little drier than the average dry gin), 1 half shot Cinzano vermouth, and whatever juice I could extract out of one seville orange. I used a dash of Peychaud's bitters. I did a channel-cut from the skin of that nice seville orange for the garnish.

Because this type of orange is not sweet, the overall flavor highlights the gin itself, but the citrus flavor adds a nice accent, and brings out some of the hidden aromatics.