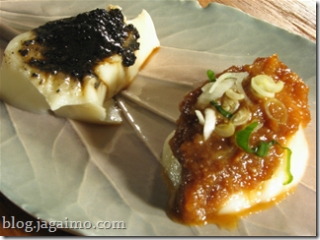 Godoufu, the soymilk-based mochi-like "tofu" from Saga prefecture, has been featured here before, shortly after I reminisced about my first time tasting it when I was ceramics-hunting in Arita many years ago.

This weekend I got the urge to make it again. It's a bit time-consuming to prepare, so I don't really make it all that often, but I made it twice this weekend. Yesterday I went to a potluck, where my quadruple batch was consumed or otherwise claimed by others. I decided I wanted a bit more for myself today, and I really had more than enough soy milk this time... I made a huge batch of soymilk on Saturday morning.

The basics are simple, but a bit time-consuming. Start with a truly rich unsweetened soymilk. Milk substitute monstrosities such as the popular Silk brand are completely unsuitable, and even most unsweetened soy milks sold at health food stores will not have enough protein or flavor. If you have a local Asian soymilk producer, they probably sell the thicker type of soymilk that will be suitable for the task. Otherwise, you can certainly make your own... That's what I did this weekend, and it's why I ended up with about 9 liters of thick soymilk and a frightening amount of okara.

Kuzu-ko tends to be clumpy, so it's best to use a spice grinder, a mortar and pestle, or even the back of a spoon to crush the kuzuko into a fine powder. For best results, whisk the cold soymilk with the starches until the solids are completely dissolved; otherwise, small translucent balls similar to gravy lumps tend to form during cooking.

Bring the solution to a boil, then immediately take off the heat and start stirring furiously with a sturdy spoon. Reduce heat to medium-low, and keep stirring like mad, making sure nothing sticks to the pan. Keep this up for about 30 minutes.

In many pans it's a bit tricky to keep things from sticking and browning at the bottom, but regularly pulling the pan off heat can help regulate the bottom of the temperature. In a pinch, if the bottom of the pan starts to brown, I've been known to pour out the mixture into another pan and continue the process; it's really hard to rescue the godoufu if things start sticking, so I do my best to prevent disaster.

Turn out the mixture into an airtight storage container. Some Japanese sites recommend placing a layer of clingfilm wrap on the surface of the godoufu to prevent a skin from forming.

Next, if at all possible, put the sealed container in an ice water bath for about 5 minutes. Refrigerate a few hours until set. (In a pinch, you can eat after about an hour, but it will hold its shape better if it's refrigerated longer).

In my experience, godoufu keeps reasonably well for about a week, but it must be kept in an absolutely airtight container.

Two typical sauces often used to top the godoufu include:

Bring ingredients to a boil. Simmer for a minute or so. Allow to cool.

On medium heat, bring ingredients to a simmer, stirring regularly. Cook for about 5 minutes after the mixture comes to a boil, until it thickens.

This one is nice with a little finely chopped scallion.

Last night I also tried the godoufu with kinako and kuromitsu, which was very similar to a sweet called "tounyuu no warabi-mochi" the Hiromi and I ate in Kyoto a couple years ago. It should also be nice in zenzai (sweet red bean soup) in place of shiratama or mochi.