I go through these mini-phases. Two weeks eating nothing but Japanese food. A pasta-heavy month. A week full of salsa and guacamole. A lot of tofu in a little time. A series of soups. 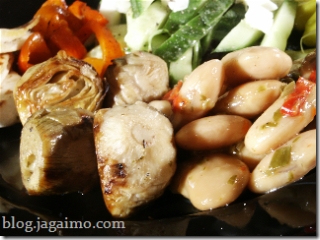 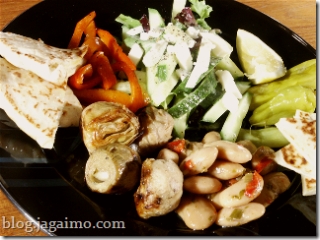 Sometimes it's just a matter of what I've been shopping for, and what's in the refrigerator at any given moment. Sometimes, though, I get the feeling that my body is telling me that it wants something. Maybe that's what's been going on this week.

Actually, I remember that I was craving falafel last weekend. It didn't work out; the place I went to was closed, and I ate something entirely different. But when I was going home hungry late Thursday night, I got an urge for hummus. So I grabbed some preservative-free ready-to-eat hummus, pita, and a cucumber at the Wallingford QFC, and went home and ate a light late-night meal.

Friday night, when talking about dinner with a colleague of mine, I suggested a couple of restaurant choices, one of which was Vios Cafe, probably Seattle's best Greek restaurant. I brought another friend along, too. So I had two nights in a row of pita... but wait, there was more! I still had to use up my hummus and pita from the supermarket, so Saturday's lunch was familiar.

You'd think that'd be enough, but with two more pita to go, I realized today that the hummus wouldn't be the end of things.

After having a semi-Cajun lunch at the Pike Place Market, and indulging on little donuts not long after, I thought it would be nice to have a simple dinner tonight. I went to the gym to work off some of the damage, and bought some big marinated gigandes beans and grilled marinated artichokes to take home.

I roasted a red pepper, made a little cucumber salad, and brought out some pickled peperoncini from the refrigerator. Even though the pita are store-bought, I used the restaurant trick of refreshing the bread by grilling the pita a bit, which made them soft and fluffy again. Then I brushed the pita with really good olive oil, which just makes them indulgent.

I still have some of the gigandes and the grilled artichokes, but now that I've finished up the pita, I think I've satisfied any lingering cravings for flatbread. Maybe tomorrow I'll make a little farro.