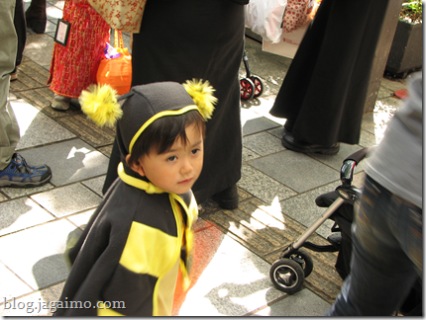 On the weekend we discovered that Japan has taken a marked interest in Halloween... Harajuku and Omote-sando were filled with costumed children and adults, some carrying plastic pumpkins to various shops that apparently were giving away small treats. 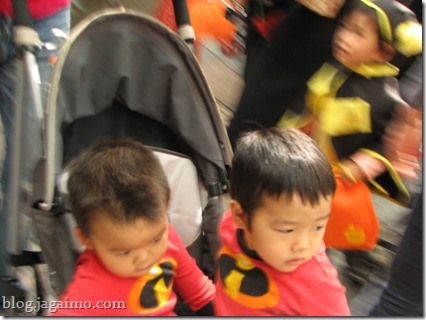 Some people even lined up outside department stores, presumably for some sort of treasure. 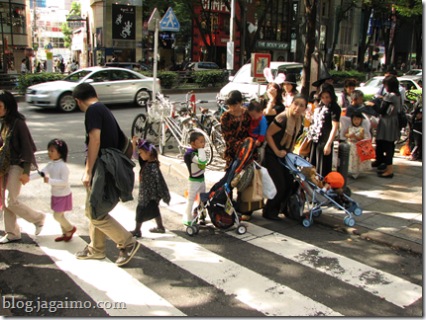 Harajuku had clusters of costumed children. We didn't make it out to the annual Kawasaki-area Halloween parade, but I understand that's an even bigger event than what we spotted in Omotesando.

We can perhaps thank global commerce and expert marketing, but Halloween seems to be roughly a week-long event in Japan. Costumes start on the weekend preceding the holiday, as far as I can tell, and continued all the way into bars and restaurants on Halloween night.

Bakeries offer pumpkin filled cookie sandwiches and in the shape of Jack-O-Lanterns, and I even found a Halloween-themed tenugui, or dyed cotton cloth. Halloween is all about commerce, much as it is in the US, without all the visceral impact the symbolism of Halloween has to most Americans, weaned on ghost stories about witches and zombies, during horror movie season.

Ladybug and wizard: Off we go 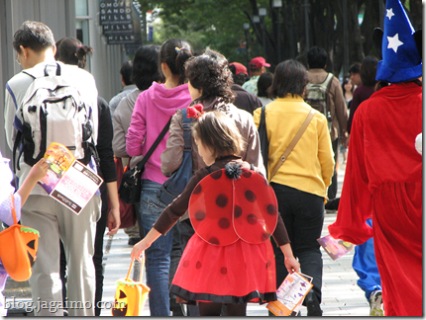 Obon and Halloween are really the same holiday, differences in rituals aside. Since I usually avoid coming to Japan during the peak heat of summer, I have only witnessed Nikkei celebrations of obon, and those a month earlier than typical (to fit in to the more important Seafair schedule in Seattle). But both are ways for living people to come to terms with death and the unknown.

In Japan, though, any of Halloween's association with the supernatural is apparently nonexistent. Cuteness rules all costuming decisions; nobody tries to be over-the-top disturbing, and everyone appears to use Halloween as an excuse for consumption.

In contrast, I remember being at a shrine in Kamakura just after dark many years ago, and my Japanese companion was clearly slightly unnerved... I was unable to relate, as I felt none of the same goosebump-raising vibrations that come from a lifetime of association of shrines with death and ghosts. Americans, more influenced by Christian teachings that tried to quash pagan leanings in indigenous European cultures, are more likely to find their hair raised by the shadows and noises of Pan's forests.