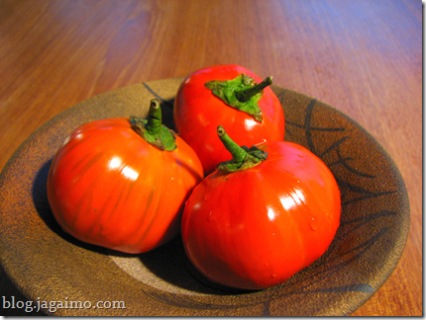 You think you're looking at fleshy beefsteak tomatoes.

But you are deceived. You're actually looking at an uncommon variety of eggplant. I picked it up from the Alvarez farms stand at the Pike Place Market a little while back.

They were surprisingly firm, which I thought would be an advantage over the occasionally quite mushy ancient eggplants I sometimes run into at supermarkets. In fact, these were firm enough you could probably hurt someone if you threw them hard enough.

Had I followed my usual impulses when playing with a new food, I'd have done my best to highlight the remarkable qualities it has and not fuss with it terribly much. I would have wanted to emphasize the remarkable color and the bold shape.

But that was not to pass. That week I had an absolutely relentless craving for comfort food, and my usual impulses were undermined by cravings for things roasted, baked, and cheese-laden.

So I chose instead to obscure my treasure by turning it into something fairly pedestrian, but certainly comforting... After slicing, salting, and removing aku from the eggplant, I pan-fried the slices with a dusting of flour, egg and breadcrumbs. While I was waiting for them to cook, I prepared a quick tomato sauce from some nice fresh tomatoes, using a heavy hand with red wine. I placed some buffalo mozzarella and parmesan on each slice, spooned over some sauce, and baked until everything was melted. 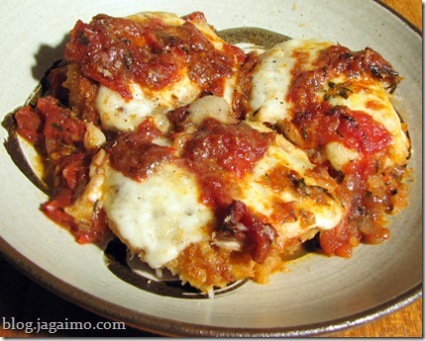 As you can see, I managed to completely obscure any of the charms of the eggplant, but it did the trick appealing to my need for self-indulgence.

Surprisingly, the eggplant had a sharp edge*. The bitterness was more intense than most varieties of eggplant I've worked with, even though I did the standard salting and rinsing trick. The sweetness of the tomato sauce and the mozzarella helped counter some of the harshness, so perhaps my choice was clever after all.

I'm now tempted to see if I could tame the bitterness by pickling the eggplant, Japanese style. I haven't been at the Pike Place Market for a few weeks, though, so I'm afraid I've probably lost my chance for the season... but perhaps we'll meet again next season.

* I've since learned that this variety of eggplant, called Turkish eggplant, is generally consumed underripe; it becomes bitter as it transforms from green to orange.