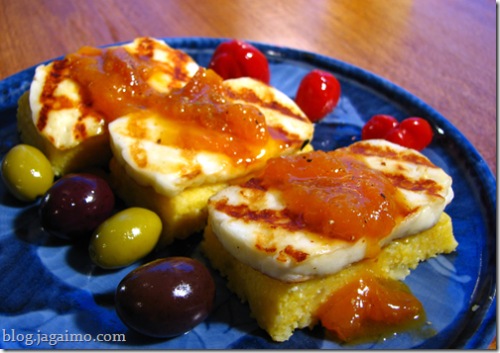 It's hard to imagine now that Seattle's wind and rain have started to kick in, but only a month ago, local apricots were still in season.

Just around that time I had stumbled upon a beautiful bunch of apricots at the U-District farmer's market, and thought it would be nice to make anzu-zake, an apricot-infused liqueur similar to umeshu. Unfortunately, a few of the apricots I used were so ripe that a couple of them had hidden bruises. I spotted them just before they lost their color and reclaimed them from the vodka solution, and chopped up a couple more fresh ones from another source. Simmered with a little sugar, a bit of yuzu juice, a tiny knob of fresh ginger, and a pinch of salt, this makes a spirited accompaniment to cheese.

Bad puns are cruel. Sorry about that.

I happen to be a fan of the occasional grilled halloumi... that's a a cheese which comes from Cypress, most notable for holding its shape when cooked. It's best when quickly grilled and gently caramelized. Because it's somewhat salty, I tend to prefer serving it with a sweet accompaniment like quince paste, but this boozy apricot sauce was even better.

I wanted to have something more than just a big pile of cheese, so I boiled some polenta seasoned with salt and butter, then let it rest at the bottom of a small baking pan. After it cools for 10 minutes or so, it's easy to cut into rectangles suitable to rest the cheese on.

Dressed with the apricot sauce and some fresh black pepper, the strength of this dish is the relatively gentle interplay of flavors. To provide some flavor contrast as needed, I served it with some fruity olives and some pickled pepadew peppers.

When I made this, I was only in the mood for a light meal, so I had a little salad and not much else, but it would be even better to serve one per person as a nice appetizer. It looks fancier than it is; I had it on the table in about 15 minutes after the polenta was cooked, and I wasn't in a rush. You could easily substitute ready-made quince paste or probably some types of chutney...

For a little while I couldn't get enough halloumi, and I tended to serve it on a bed of Bibb lettuce instead of polenta. That's even easier... but I think this version is prettier.