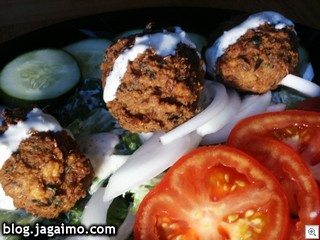 From 1994–1996, Imbiss falafel was one of my staple starving student lunches in the city of Marburg, Germany. Most of the Turkish restaurants in Marburg served falafel on wedge of a large round dough which they called pide, but has more in common with focaccia than the standard pita. The usual cost for such a lunch was about DM4 (give or take 50 Pfennig), or about $3, making it one of the most inexpensive lunch options in town.

I don’t know why I never make falafel at home; perhaps the relatively ready availability at various quick-service Mediterranean restaurants around Seattle is a bit of a distraction. But I can usually hope for no better than uncharismatic, flabby pita when I go to such an inexpensive place, although there are some notable exceptions when I am willing to spend a bit more for a full-service meal, such as at Mediterranean Kitchen (Bellevue, Seattle).

But at home I have the power to escape the travesty of stale or flavorless pita bread; I can make my own, and serve them just seconds after they leave the oven. It’s surprisingly easy to make good pita, as the more familiar variety requires only a quick knead and is a fairly moist, easy-to-handle dough. Rolling the dough out evenly is the most difficult thing, but is a surmountable challenge.

Falafel, too, sometimes suffer from the flaw of premature frying, to save some effort on the part of a harried staff far more concerned with pushing out orders than getting the best possible flavor. Unfortunately, falafel set aside for an hour or so and microwaved tend to be displeasingly dry. It is, alas, a fairly common strategy, but again, home cooking comes to the rescue. I soak dry chickpeas and fava beans for a few hours, chop them in a blender, add onion, various seasonings, and salt, then shape into small balls and fry.

In this case, since I was making dinner and not eating on the run, I served the falafel more like a salad, and used the pita as a utensil. I made a little yogurt sauce with a little garlic and salt, which should actually probably be served with the cucumber, but which mysteriously snuck onto the falafel itself, in addition to coating the salad.