Sunday we endured almost unpleasantly hot weather most of the day. Seattle’s summers tend to be moderate and plesant for the majority of the season, but this season we’ve alternated between drearily cool and cloudy and excessively sunny.

To cool off, we had sakuranbo soumen, another treat from my stash of FoodEx sample booty from this March. 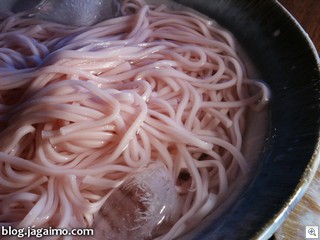 Made with cherries to bring out a pinkish hue, the soumen are cut slightly thicker than typical. Hiromi kept the noodles in a bath of ice water in one of my Hagi ware bowls, doubling the pink.

Ever so slightly sweeter than ordinary soumen, you’d barely notice the difference, bu the visual appeal is certainly striking. 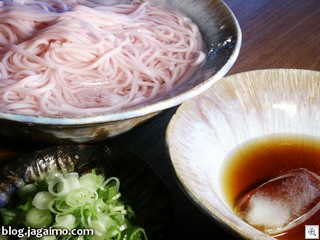 We’re not much for convenience foods, but thanks to the insanely warm weather, we did take advantage of the supplied dipping sauce, diluted with a bit of water and further chilled with an additional ice cube.

It was a refreshing dinner, especially after a heavy breakfast and lunch.

We made hiya-yakko (cold tofu) with yuzu-kosho, a sort of staple around here, to go with it, and another cold dish, an ohitashi of ingen (green breens), blanched and dressed with nothing more than ginger and soy sauce. 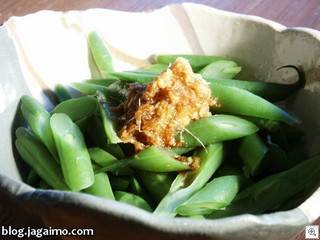 In fact, for the ohitashi, we used a sesame-derived “soy” sauce, marketed in Japan to those unfortunate enough to have a soy allergy in a country as dependent on that bean as Americans are on corn. For the hiya-yakko, we used a high quality Japanese Maru-daizu soy sauce, and found the flavor surprisingly hard to distinguish when served side-by-side.