I promised a roundup for Konnyaku Day… Alas, thanks to my rather late announcement, there are only a couple of entries (at least so far). A number of people wrote in that they were planning to participate, so hopefully there will be a few more. However, I’d be happy to add anything that comes in this week. Just post a comment and I’ll add yours.

From Obachan’s Kitchen & Balcony Garden comes two treats: Konnyaku no miso ni and sashimi konnyaku. Konnyaku no miso ni is a clever variation of a typical braised vegetable dish, most commonly applied to eggplant. I definitely want to make this dish.

I’m also jealous that Obachan has access to unusual flavors of “sashimi konnyaku” which aren’t readily available in the U.S. She made yuzu konnyaku and aonori konnyaku with a sumiso (vinegared miso) sauce.

Amy of Blue Lotus took advantage of the noodle incarnation of konnyaku. With a bit of sakura-ebi and shiso, it’s an example of contrasting textures and flavors in each bite. 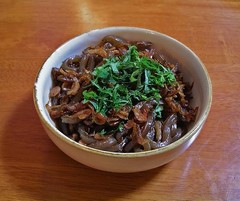 From Hiromi’s blog (in Japanese), we have Houtou with Konnyaku. You may remember Hiromi made Houtou shortly after we came back from Japan in March. She did the hard work on this as well, though I helped twist a few of our konnyaku slices into twisted shapes following her instruction.

I’ll extend the Konnyaku day roundup if anyone has some other dishes, even if you’re just getting around to posting your entry this week… Post a comment and I’ll add you!