Last week Hiromi and I decided to take advantage of one of the packaged foods we picked up at Takaragawa-onsen called houtou, which are fantastically wide noodles typically served with fall or winter vegetables.

On the other hand, I didn’t want to completely ignore the fact that we’re already seeing the bounty of springtime. I picked up some fiddlehead fern fronds, and thought a simple warabi no nimono, simmered fiddleheads in seasoned soup stock, would be nice.

And then I thought I’d like to have a little protein in the dish, and my mind turned to a favorite oden classic, which is ganmodoki, a sort of tofu fritter. I started looking at packaged ganmodoki, and wasn’t inspired at all. I realized it wasn’t that hard to make ganmodoki, and so I decided to make it at home. 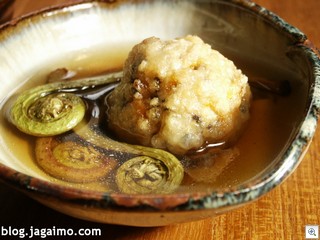 Ganmodoki often has some hijiki in it, but I discovered I was completely out. Instead, I used some shredded gobo or burdock root, along with the typical shredded carrots. Hiromi told me that she’s partial to ganmodoki made with sesame, so I also used some kurogoma (black sesame) and the slightest hint of sesame oil. The fried ganmodoki went into the seasoned soup stock, perhaps not quite long enough to get the incomparably oden-like quality of pervasive soupy richness, but just about right to bring out the freshness of the tofu. 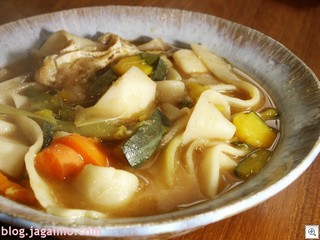 Houtou is seriously rustic. You are probably less likely to find this nabe dish in a U.S. Japanese restaurant than you are to find a fortune cookie in China, which means the odds are almost infinitely improbable.

Our favorite nabe is sadly leaking a bit, but houtou would normally be prepared on top of a portable konro at the table. We had to improvise, and prepared it in a pot on the stove and transferred it into my largest Hagi earthenware bowl.

Houtou aren’t really substantially different than udon, except that they are cut thinner and substantially wider. The soup usually has root vegetables such as carrots and satoimo (small taro), along with Japanese kabocha squash.We also used strips of abura-age, loosely translatable as tofu puffs. They have a slightly spongy texture that just loves to absorb tasty liquids like broth. The seasoning base of our broth is miso, along with, of course, some dashijiru. Although the gift package Hiromi found at our ryokan’s convenient omiyage-ya-san includes some miso-based seasoning, she wanted some more miso intensity, and we used a blend of hatcho-miso and a lighter miso.

The result is rib-sticking comfort food. It’s the kind of food someone’s grandmother would make: not terribly fancy, but somehow incredibly satisfying. We look forward to devouring the other half of our stash of houtou sometime soon…