Now considered kind of quaint and old-fashioned, an donatsu or sweet azuki paste stuffed donuts were once a staple of Japanese-style bakeries. Increasingly, mushy, cloyingly sweet, preservative-laden versions sold at convenience stores have displaced the fresher incarnations of this sweet, but it’s worth indulging in when you find the real thing. 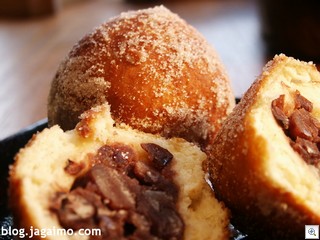 I can’t think of anywhere in Seattle to buy a decent an donut. But I can make a fairly decent interpretation myself...

Sunday morning, after realizing I had no more yeast left, I abandoned the idea of making anpan, the baked bread stuffed with the same kind of red bean paste. I did, however, have eggs, baking powder, and milk, so I put together a cake-like dough, incorporating a bit of melted butter and sugar. The dough was slightly sticky, but solid enough to allow for wrapping the dough around the filling.

The day before I had prepared some ogura-an, sweetened, coarsely mashed cooked azuki beans. I broke the usual convention of using about 50% sugar in the bean paste, preferring to use just enough sugar to taste the sweetness. I probably used no more than 25% sugar.

The main challenge is to make the outer layer thin enough that the dough can cook through, and almost all of them turned out just fine. After frying, I tossed the balls with some granulated sugar to add some textural contrast and an initial hit of sweetness.

We made a couple of lattes and indulged in a late breakfast.

Fresh from the fryer, our homemade an donuts were a totally different experience than I’ve even been able to have in Japan, since those are almost always sold after they have cooled down to room temperature. A tiny hint of crispness as we bit into each piece yielded to a soft cake texture, followed by the warm, sweet bean center.