We departed Japan on Sunday, but not without a valuable trip to Takaragawa Onsen, a hot spring ryoukan in Gunma prefecture.

After a quick lunch at a Meguro-station cafe on Saturday, Hiromi drove us through a mysterious maze of toll highways about three or four hours, but I managed to sleep through about two hours of road time, oblivious to my surroundings. Only when traveling internationally do I seem to magically acquire the ability to fall asleep anywhere, anytime.

For me, a stay in a ryokan is an opportunity for an extravagant simple meal, but it also offers an ideal bathing experience…

We stopped briefly at a highway service area for a snack, and after resting a bit upon arrival, we made a quick trip to the rotenburo (outdoor hot springs bath). This hotel’s rotenburo is one of the largest konyoku-buro (mixed baths). Although in other konyoku-buro, people generally enter the onsen naked, people at this onsen are advised to cover themselves with a towel (men with a tiny towel, women with a larger towel), as one sign indicated, so that “nobody has to be embarrassed” using the konyoku-buro.

We didn’t feel comfortable really photographing the baths themselves, of course, but here’s what we found along the way… 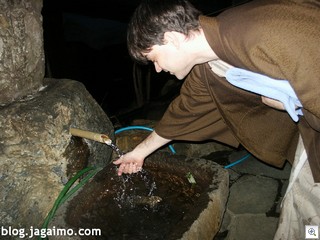 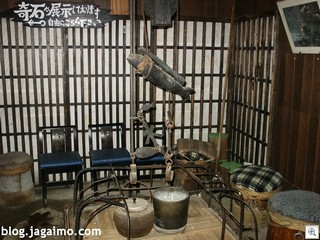 In old Japanese houses, people sat around the irouri to share dinner and discuss the day’s business. For the contemporary onsen-goer, it seems to be a destination for an ippuku (rest, but actually a euphemism for a smoking break). 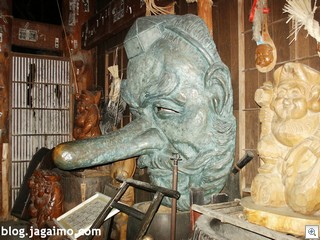 This hall is filled with tengu and tanuki, mystical creatures with exaggerated body parts.

In the ryokan eating area 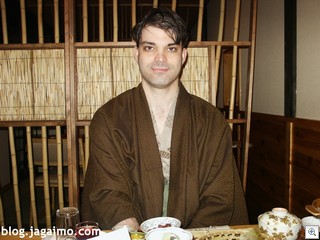 After soaking a bit we sat down to dinner. In this particular ryokan, most floors have two or three eating areas, at least in the steerage class, although in the most expensive rooms they serve fancier meals in the room. 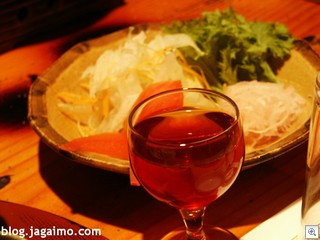 The apertif seemed to be some sort of shiso-based shochu infusion, heavily sweetened and only lightly alcoholic. 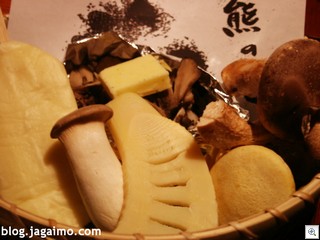 Sumibi-yaki, char-grilled foods, seemed to be the theme of our stay. For a spring meal, the selections we were offered were surprisingly full of various “wild” mushrooms, but we had some fresh spring bamboo shoots as well. 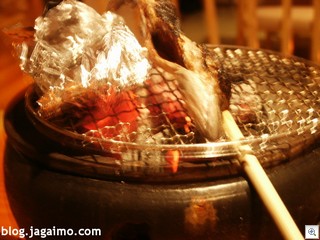 Each table has a small shichirin, or clay grill, placed atop a concrete trivet with a wooden base to buffer against heat damage to the table. 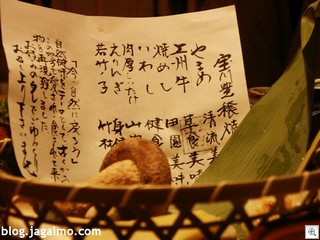 Each diner receives a note describing tonight’s menu. You can see from the “yamame” (small fish) and “joushuugyuu” (local beef) items that this is Hiromi’s menu. 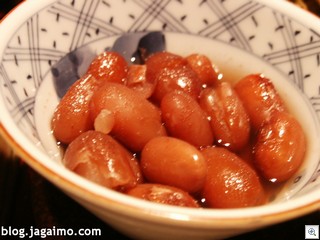 A rare sweet-savory bean side dish, apparently typical for this area. Most of Japan prefers beans as a dessert, but this dish is prepared with enough salt to make it a pleasant side dish for a savory meal. 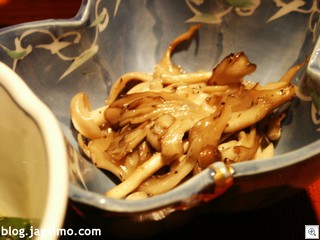 Several standard side dishes, such as ohitashi (blanched vegetables), pickled vegetables (nozawana, for example), and other obligatory ryokan fare, such as nabemono, were also featured. I had a cold dish with a kind of abura-age in clear soup, as well. 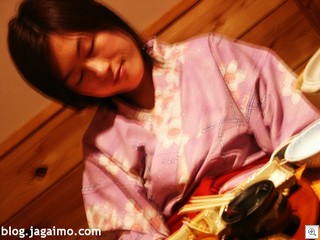 After the meal, Hiromi became a bit sleepy.

On the banks of the river 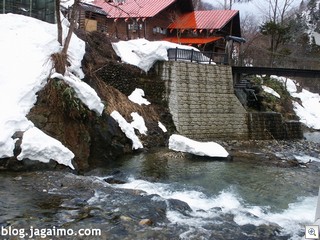 We somehow managed to fall asleep around 9 in the evening, but the next morning, we awoke to this view outside our room’s window.

The bridge to the hot springs 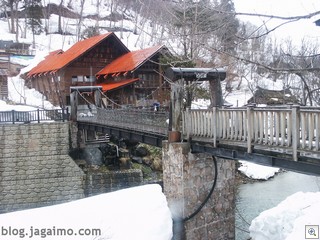 We took advantage of the hot springs once more in the morning… a bit of snow started falling upon us while we were bathing. 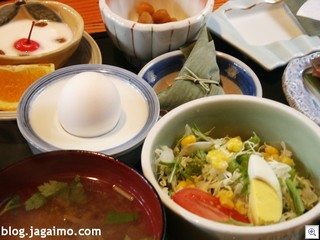 Breakfast included miso soup, salad, bamboo leaf-wrapped nattou (fermented soybeans), more of the sweet-savory local beans, yogurt, an orange segment, and a soft-boiled egg, as well as some pickles and nori, not pictured. 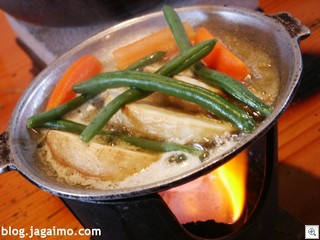 This marks the first time I’ve been served ketchup at a ryokan, but my breakfast featured a sort of Western-themed sukiyaki, in lots of butter, meant to be dipped in ketchup. 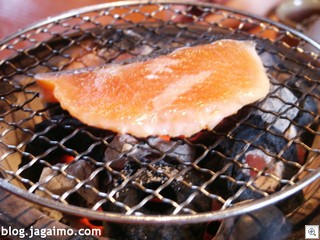 Salmon for Hiromi. We had a lot of fire at our table. 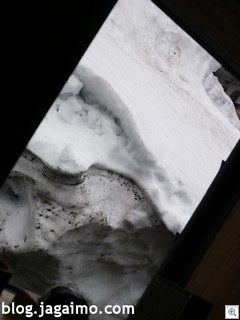 From our seats at breakfast, we could see the tall winter accumulation of snow that hadn’t yet sublimated or melted. 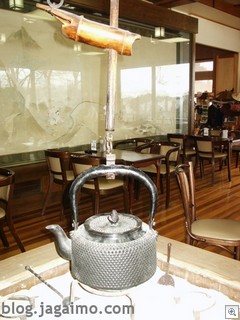 I’m guessing this irouri, not terribly well ventilated, doesn’t get much use in practice. 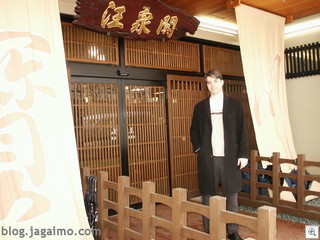 We had to rush back to Narita airport, where we met Hiromi’s parents one last time, and started the long journey back home.