Except for a four hour round-trip commute to an unpowered office on Friday, and a seriously long delay at the UPS facility where I was trying to pick up a shipment that I needed to distribute as quickly as possible to some Christmas customers, I was largely unaffected by the fallout from Thursday’s crazy windstorm. Or rather, I was far more fortunate than many others, as the only serious problems for me were a minor loss of income and, unfortunately, a seriously long delay trying to get to a football game that Hiromi had planned to attend months ago.

Hiromi came back to Seattle for a few weeks starting last Wednesday. Thanks to my work schedule, I haven’t been as attentive a host as on previous short-term visits. In fact, thanks to some of the usual last-minute holiday gift orders, I immediately took advantage of her to help me pack some shipments.

We tried to go to the football game on Thursday night, but a tremendous windstorm started to strangle the city just around rush hour. I thought it would be clever to take the bus instead of trying to find parking, but thanks to insane traffic, the normally 40 minute bus ride extended to well over two and a half hours. Hiromi was equally stuck on a bus going from Fremont to downtown… both of us bailed on the bus when we realized we could walk faster… Hiromi got out near Queen Anne and I got out at Westlake… we arrived at the Seahawks game just seconds before halftime.

Friday, my home had no power troubles; we just saw predictable plant destruction. But that wasn’t true for much of the rest of the area. The Wallingford post office was darkened and had ominous handwritten “CASH ONLY” signs plastered all over the windows, like you’d expect to see in a shop owned by a survivalist.

We had planned a party on Saturday, and some people called and wondered if it was still on… Since we had no power interruptions, we just plodded on as planned, and things worked out swimmingly.

Tonight I made a dish I had planned to serve at the party, but didn’t quite get to… Let’s just say I was a bit distracted that night. I served about 16 or 17 dishes and skipped a few things I had originally planned. 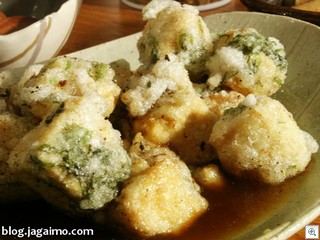 Agedashi-doufu meets Hong Kong-style Salt-and-Pepper Tofu, with the help of a bit of shiso for a flavor contrast. 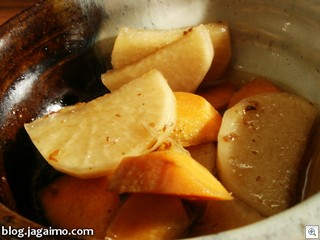 I served one of my favorite short-term tsukemono (pickle), daikon to ninjin-zuke, at the party, but fortunately, I reserved some of them for us to enjoy later.

Nasu no tsukemono with ginger 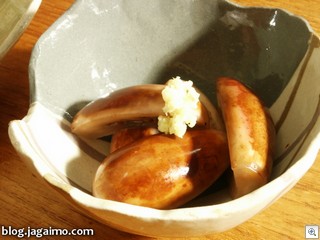 I usually prefer, I think, salt-cured or nuka-cured eggplant pickles, but I was pressed for time last week, and I don’t have the gear or patience for nuka-zuke anyway. So these vinegared pickles, sweetened a tiny bit with honey, would have to do. Just for tonight, we served them with a bit of ginger, which turned them into something a bit magical; before, they were a bit tart for eggplant pickles, even with the honey. Somehow the ginger balanced everything out. 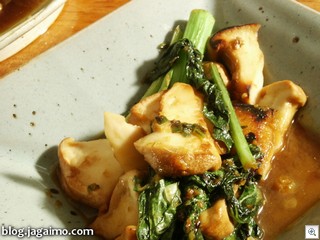 I served a prettier version of this dish at my Saturday party, but tonight I had one abalone mushroom left, and a tiny amount of yu tsai or yu choi (similar to rapeseed plant greens or nanohana). So I revisited the idea, this time with a bit of a heavier hand with ginger. Both Hiromi and I really find these “abalone mushrooms” fascinating… they have a great texture, and can actually look very similar to slices of abalone when stir-fried. 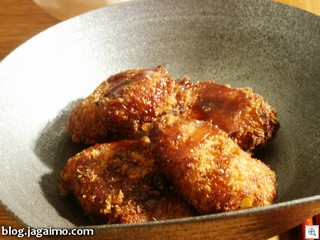 I’ve made nice kabocha korokke before, and these are fairly nice, but they almost browned too much. This is what happens when you  freeze them and fry them frozen… I had some left over from the party, and tonight we went all out with the fried food to make a bigger dent in our party leftovers. Usually I make squash korokke with butternut squash or kabocha, but I only had an acorn squash handy. The result was just as nice, though a little sweeter and a little less nutty.