A couple weeks ago, Hiromi got a job offer that was hard to pass up, back with her old team, and decided to go back to Japan, even though it complicates a few things… She had informally extended her unpaid internship at a quirky Seattle-based mobile phone software company, and planned to start school again in January… Hopefully the sudden change will not make her next visit in December too messy when she goes through passport control.

The post-9/11 security rules make going “out of status” (including unplanned changes) on a student visa particularly subject to scrutiny.

After a long period of having a roommate last year, and the almost continuous presence of Hiromi this year, coming home to a completely empty home is very strange. I couldn’t sleep very well the last four or five nights, as my mind and body adjust to unfamiliar circumstances. When I’m traveling, I don’t have this problem, but at home, my mind is not at ease when new stressors enter my life.

Though I’ve been eating particularly lightly and suffering from a bit of stomach irritation the last few days, I just remembered how nice this key lime meringue pie tasted… 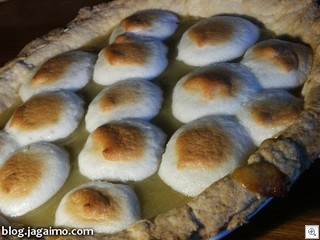 It has been languishing, almost forgotten in my archives, from around the time Hiromi went out of town for a few days late in the summer. The meringues weren’t so pretty, but the lime curd was great. I think this might have been my first or second attempt at key lime curd. I really don’t want to over-indulge in sugar right now… my waistline has expanded over the last few months and I’m not very happy about that… Increased commute time and more eating out than average since September has puffed me up a bit.

The crust was decent, though it looks a little sad in the photo… more crispy-crumbly than crispy-flaky, it was neither a great example of an American pie crust nor a pate sucree. But it did wonders for the meringue, which likes to sabotage the crispness of pie crust; the crust stood up to the curd and retained a pleasant crispness.