My little cold, rice porridge, and Families with Children from China

I came down with a bit of a cold this weekend, and Hiromi thoughtfully prepared some okayu, or rice porridge, for me. This is standard comfort food for anyone the slightest bit ill in Japan. We ate it with some pickles, some of which were Chinese, and some of which were Japanese.

She was craving dengaku-nasu, so my responsibility was to broil the eggplant and prepare the neri-miso, or dengaku-miso, and carefully broil the dengaku-nasu once again with the miso topping just until it starts bubbling. Its very easy to turn dengaku-anything into a crunchy mess, and I’ve had a few disasters before, but this one worked out. I’m sure I’ve explained it elsewhere, but neri-miso is made with miso, sugar, mirin, and, optionally, some dashi-jiru (Japanese soup stock) in roughly equal proportions. The further west in Japan you go, the milder this will likely be, and the further north, the the saltier. 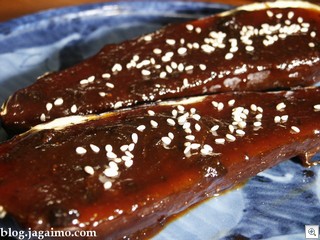 On Sunday, in spite of my slight health complaints, we went to an event for Families with Children from China, where we showed off dragon beard candy, and some matcha chocolates. Hiromi offered samples and some product information, and I filled in details about the products and handled credit card transactions and so on. We had fairly good results, and I left a bit more than was officially requested for the space fee.

After the event, we got crepes and coffee for a late, light lunch at Cafe Javasti in Maple Leaf. When we got home, Hiromi wanted to watch the Seahawks game, so I served some “vegetable chips” and tea for both of us, and later brought her a beer and some Theraflu for myself. She thought it was kind of funny that I was bringing the food so that she could watch the game.

(Although I’m happy that the Seahawks won handily on Sunday and I did pay some attention, I’ve never been a huge afficianado of spectator sports and she was far more excited about the game than me…)