We kept ourselves busy the last few weeks, even though last weekend, for example, was a more leisurely kind of busy. I haven't scheduled any product demos since just before the Christmas season. This was our first weekend back in the routine, and we took it relatively easy, with just a four hour Sunday demo in the cards.

Yesterday we handled a fair number of internet orders, and took care of some necessary evils related to either home or office. In the process, we encountered this little made-in-China, post-holiday-clearance pillow creature: 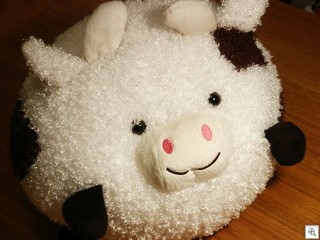 He found a new home. This doesn’t happen often. Several years ago, after a missed opportunity and a subsequent couple of trips of half-serious searching, I bought a (huge) stuffed dog from The Dog Club on a trip to Japan, which went on to become a huge licensed product with a worldwide presence. In spite of me being ahead of the trend curve on this one, this odd fisheye-perspective dog, along with the collection of teddy bears primarily inherited from my great-grandmother, nevertheless continues to inspire snickers and innuendo from non-Asian visitors. “Momo”, the litte round cow pictured above, was, however, Hiromi’s pick. My masculinity in this case cannot be questioned, although I can’t say that’s ever been a terribly important consideration for me.

Subsequent to accomplishing this very important mission, at a hardware store in South Seattle,  we found some suitable shelving to help bring sanity to my office. I like the shelves that I got, so I’m likely to expand that set to complete this office sanity effort.

Alas, this pilgrimage to South Seattle did not go as planned. We tried to drop a couple of items at a post office on the way to some other errands. Not only were we foiled by some awful stadium traffic starting at the downtown exit of Highway 99; I also discovered that this particular post office offers no Saturday collection, which meant that my decision to shorten my path worked out to be both fruitless and inefficient.

Somehow we lost all motivation to prepare food after our mission to South Downtown, and the traffic distracted us from our original goal of obtaining some very fresh tofu from Thanh Son’s factory shop. So we made our way to Maekawa, which, if you order from the relevant three pages of the menu, serves izakaya-style food.

Although we’ve been eating a fair amount of Japanese food lately, it’s all been homemade. This was Hiromi’s first-ever meal in a Japanese restaurant in Seattle, and it’s probably one of very few places that I would take anybody who is actuavlly Japanese. This isn’t because it’s spectacular food; it’s decent, but not pushing any boundaries. The thing that I dislike about most Seattle Japanese restaurants is the distortion of portion sizes and the bizarrely non-Japanese combinations and seasoning approaches. But this place is so familiar and ordinary, that it wouldn’t be terribly shocking to find similar food in a little neighborhood spot in Japan. Except for the strange “teishoku” section on the menu, which is out of place on an izakaya menu, it’s all standard izakaya fare, with a few interesting house specials and so on.

It was, of course, Hiromi’s chance to eat some non-vegetarian Japanese dishes she hasn’t been able to indulge in when I’m cooking. She was simultaneously curious about the place and skeptical, but pleasantly surprised by the comfortable familiarity of it all.

Tonight, on the other hand, we had a bit more initiative. We had some soup and rice, but most importantly, we made a few different kinds of spring rolls. 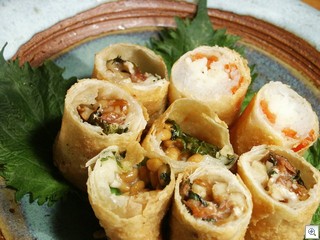 I make a few unconventional spring rolls, but tonight we went over-the-top and made about five or six variations. We put some away in the freezer for later indulgence, but we alternated between heavy and light flavors.

One was nattou, camembert, negi (actual Japanese-style leeks in this case) and shiso, and an alternate version with nattou, negi, takenoko (bamboo shoots), and nori. We also made a simple one with takenoko, carrots, and rice noodles, as well as a version with cabbage standing in for the takenoko. We also made one with camembert, walnuts, umeboshi, and shiso, which is the only one that required no dipping sauce. For the others, especially the nattou spring rolls, we used some Japanese mustard (karashi) mixed with Japanese soy sauce. 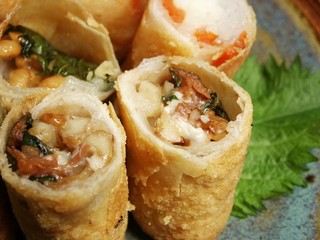