A couple of vaguely Korean meals

This week we had another nabemono craving, this time a reprise of my last kimchi soon dubu jjigae, with a couple of tweaks. I made it with some shirataki, or konnyaku jelly noodles. 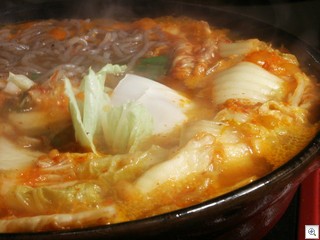 The next day we made a bibimbap, but in a clay pot, rather than stone. I don’t have a dol sot (stone bowl) handy, but I have a huge clay pot that works atop a gas burner… you’ll recognize it from most of my nabemono. As an alternative, it works reasonably well, but the “okoge” (crusted rice) is harder to extract because we fear breaking the pot. We were abe to cook the rice reasonably well, though this time, I think we had a touch too much water in the rice.

We made the bibimbap with some dotori muk, which I had previously used as a side dish dressed with sesame oil and soy sauce. 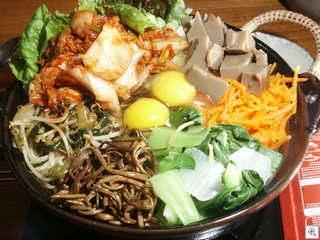 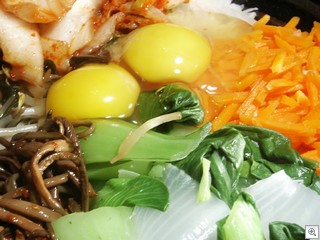 This was all fairly easy to prepare, but a fair amount of chopping and shredding was involved in our bibimbap…

Tonight, we had Hiromi’s carefully crafted osechi meal, which I can’t take any credit for, except for the photography, and a last minute run for some missing ingredients… I’ll post it shortly.