In spite of occasional binges cooking okonomiyaki, I don’t think I’ve ever bothered to photograph the results.

I have two or three variations of vegetarian okonomiyaki that I cycle through… Later this fall, I’ll probably start making some with kabocha, and I sometimes like to make it with kimchi and cheese. I probably should have done something with corn this summer, but I only started to think of making okonomiyaki when I saw a great deal on nagaimo recently… it was $3/lb, instead of the usual $6–9.

In this case, I’ve made a mochi cheese okonomiyaki, with a healthy dose of grated nagaimo, kizami shouga, and tenkasu. The mochi I purchased frozen, so they aren’t quite as dry as the kirimochi that are sold vacuum-sealed; they required no special consideration except for a few minutes of thawing before being cut into small pieces.

Tenkasu are small fried balls of tempura batter, which were originally merely side effects of deep-frying foods but now are produced as a carefully manufactured, predictable product. They add a little crunch to okonomiyaki, but the texture disappears quickly since okonomiyaki takes about 10–15 minutes to cook and steam will often soften much of the tenkasu. 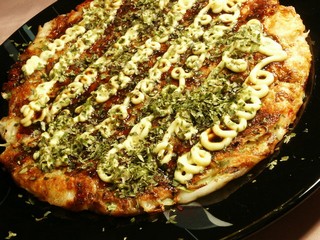 In the last minute or so of cooking, I add Japanese-style mayonnaise, okonomi sauce, and some aonori (unseasoned gren nori flakes).

I did do some actual work today and met with a whole bunch of people, most of which were productive, though nothing I can quite reveal yet. I was running around but not really overwhelmed.