Tonight I was craving some soup, and something hearty involving lentils… I think I have recently mentioned this strangely unseasonal craving. I decided I wanted something rich, something refreshing, and something comforting.

I’m far from expert on Indian cooking, but I’ve got a surplus of garam masala around right now, so I thought I’d go for something slightly Indian. I don’t have any ghee in the house, and Ballard Market didn’t seem to have any clarified butter where I looked, but I had an extra pound of butter from baking cookies on Saturday, so I decided to clarify some butter.

I made a little tomato soup, roughly inspired by the South Indian “rasam”, without really bothering to remind myself what goes in a rasam. This tomato has some amchur (mango) powder and lime juice, some good fresh tomatoes, and some onions. I cooked some mustard seeds in oil and drizzled on the soup upon serving.

I had a bit of a lentil craving, and a stash of urid daal. I didn’t feel like boiling a lot of lentils, so I ground them up and mixed them with water, salt, and some spices, then hydrated a bit. I added some onions and cilantro. These were then deep-fried, as I prepared a tomato cream sauce; this time, I cooked mustard seeds and garam masala in ghee, and incorporated this into the cream. After the lentil croquettes, or, more loosely, koftas, were finished, I cooked them briefly in the cream sauce to coat. 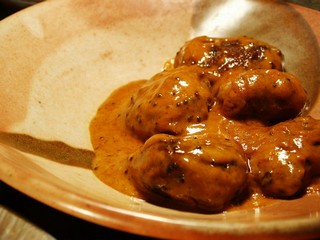 I wanted something refreshing, too, so I grilled some eggplant on my All-Clad grill pan. I let them soak in some lime juice and chilies. On the plate I added some cilantro and Hermiston sweet onions. 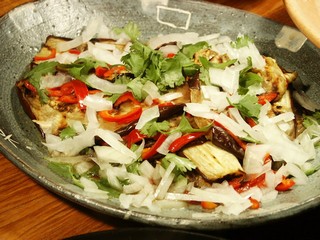 I served more rice than necessary; it was a way to abuse some saffron. I steeped some saffron in hot water before cooking the rice in it. 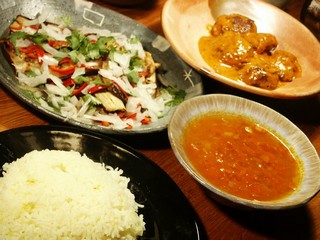