I was mostly in rush-everywhere-mode today, going from customer to customer and errand to errand. I got a fair amount done but I’m still behind on a couple of things.

Actually, until tonight, I didn’t even get around to sending out shipping notifications for the large number of internet orders I sent out on Monday and Tuesday.

I never ate a proper dinner. I just nibbled on good bread from Le Fournil and dug in to some Brie. If I had been doing this on a park bench or at the dinner table, that would have been perfectly respectable, but actually I was mostly eating it while underway this evening, between tasks.

I got a bit hungry late tonight but I remembered I have some kuri-kinton, or sweet potato puree with chestnuts, that I made a few days ago.

Kuri-kinton is one of the humblest of Japanese confections. You won’t find a lot of middle-aged Japanese mothers who make the kinds of sweets that appear at fancy wagashi-ya-san, even if it’s as simple to replicate as dorayaki. Daifuku (usually ambiguously referred to as “mochi” in the U.S.) are rarely made at home except for special events. But a fair number of people are willing to attempt kuri-kinton.

I have attempted to make daifuku at a nursery school in Japan that a friend’s family managed. This was about 7 years ago, and my Japanese was even worse at that time. The teacher gently scolded me for making them inadeqately elegantly; the 4 year olds had more experience and seemed to understand the instructions on kneading the dough better than I did, and they managed to massage out any hint of seams in the bottom. 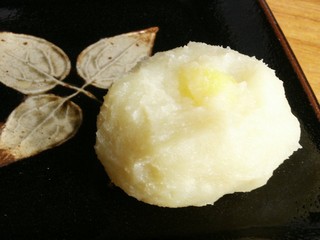 Kuri-kinton, however, requires no such attention to detail. Boil some Japanese-style sweet potatoes, peeled and in pieces, until fork tender. Drain. Add a fair amount of sugar to taste, and optionally, a splash of mirin; I recommend adding a pinch of salt to add some richness. Smash with a fork or potato masher while still quite hot (about 160F sounds good to me).

When you have a nice, smooth paste, you will then incorporate some chestnuts. For convenience, canned or jarred chestnuts preserved in syrup work well; the syrup should be drained, and may used in something else if you so desire. Otherwise, you’re welcome to attempt to make them from scratch by boiling in your own syrup; this requires very careful peeling, and even with my nifty Japanese chestnut peeler I rarely quite get that right. I’ll save the chestnut peeling for roasted chestnuts or things that require a less sweet starting point.

You can serve the kuri-kinton warm, but it’s more typically served at room temperature or slightly chilled.

Kurikinton requires no artfulness in presentation and can simply be spooned onto a plate. If you feel so inclined, however, you may shape the kurikinton into little balls or other shapes. I chose to highlight one chestnut in the center.

Serve with some good Japanese tea.