Kurogoma korokke and kazoku no ryouri

I took today off from doing demos and spent some of the day cleaning house and actually reorganizing some things that have long contributed to a certain level of chaos in my home. Among other projects, I replaced an ailing, cracked lazy susan in my kitchen with two new ones to handle my stash of spices and seasonings… it turned out that these new ones had a larger diameter than fits on the floor of my cupboard, so making use of them required a bit of improvisation. I raised them off the floor using a couple of infrequently used cake pans, and this avoided the interference of edging in the back of the cupboard. It isn’t a perfect fit, but the doors now appear closed, and I have less likelihood of dropping various bottles of spices onto an expensive piece of pottery in the sink just below, as I’m hunting for something in the back of the cupboard.

Of late I’ve found my cooking skewing decidedly Japanese. But today I cooked more “stamina” than “sappari”, more oyaji than obaachan. Today’s food was more heavy and strong tasting than the Japanese food I more usually prepare. Hiromi says it is "kazoku no ryouri", something for everyone: Korokke to appeal to the kids, kimpira for the mother, and grilled tofu for the father. 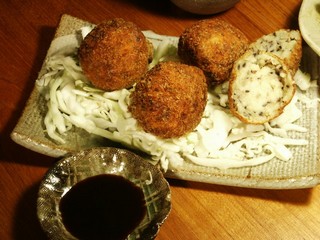 My black sesame croquettes usually have more black sesame in them, but I just ran out today, so my hand was forced… I used a lighter touch. As usual, though, I mixed in some white sesame seeds as a source of flavor, and the only thing to suffer is the visual. I really like black sesame croquettes, and I think the only croquette I like more is kabocha. Tonight, I still had some leftover kabocha from Saturday night, so we ate that as another okazu. It was actually more flavorful than on Saturday, as is usual for nimono. 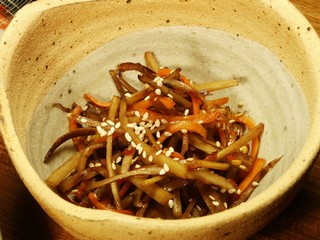 I had some help on this one. I spent my time doing the sengiri (matchstick cut) knifework, and my roommate removed aku as I did some other prep work; I got them started cooking in sesame oil and tossed in a pinch of salt; I tossed them around in the pan a bit and my roommate watched over them and added chili, shouyu and mirin and tougarashi (dried chilies). 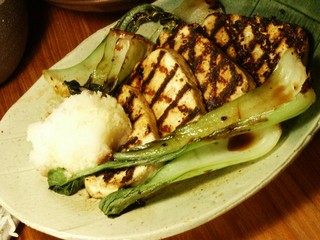 My roommate requested yakidoufu again, but I couldn’t bear the thought of repeating myself so soon, so I made a variation with a bit of a sauce; mirin, shouyu and some vegetable soup stock.

Daikon to negi no misoshiru 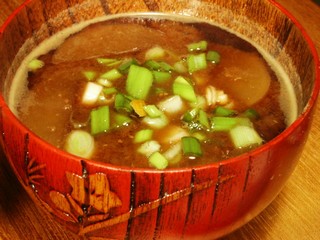 I had originally thought I would make a tofu-based miso soup, but I made a daikon-negi one instead, which is probably exactly what went into my last misoshiru. As usual, I made a dried konbu-shiitake dashijiru. In this case, rather than akamiso or shiromiso, I used a Korean-style dark miso (doenjang). This isn’t because I was trying to be innovative or creative; I just ran out of my supply of Japanese-style miso. It works just as well, though it tends to be a bit saltier than the most common types of Japanese miso.