Chanterelles seem to be fairly plentiful right now… I got some on Sunday, thinking I got a deal, but the price seems to be even better today.

Mine were apparently locally-grown. Chantrelles always seem to have a fondness for butter, so of course I used some, and shallots, garlic, thyme and cream. I served them with spaghetti.

I don’t really use spaghetti all that often… for some reason, the ubiquity of spaghetti works against it for me, and I just never think of buying it. But a while back I got a strange craving for long pasta, and I bought some and used it a few times when I needed a quick lunch. 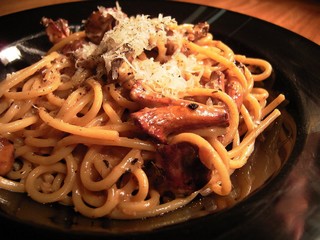 I thought today was going to be relatively light-duty, but it turned out busier than I expected. I took care of a bunch of things that have been suffering, but new tasks came in before I got very far. Tomorrow will be more eventful, because I have another very time-sensitive order and a long list of new internet orders that came in tonight.