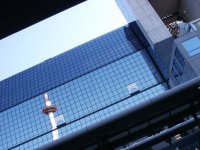 In front of Kyoto station
Hiromi and I departed to Kyoto Saturday morning... it was a trip full of amazingly close calls. We arrived at the Haneda airport just in time, after missing a connection. We had a few other complications involving catching buses, trains, and even the airplane back... Hiromi went to retrieve some items from a locker in Osaka station, which she had trouble finding because we turned out to be on the wrong side of the station. Already on a tight return schedule, I further messed things up when Hiromi and I were readjusting the two pieces of luggage, camera, and two shopping bags we were carrying back to Tokyo. Somehow, a strap on my backpack or maybe Hiromi's camera bag caught my eyeglass frame as I was removing heavy things from my body inside the train... My eyeglasses popped off my face, slid across the train car floor, and landed in the gap between the train and the platform, essentially unreachable to the most dexterous and skinny of human bodies. The station attendants suggested we wait for the train to depart before retrieving the items, and we lost about 10 minutes between trains, missing a monorail connection, and again arriving just in time for the return flight. 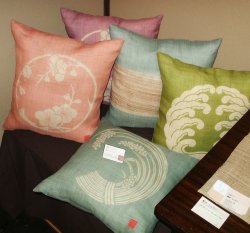 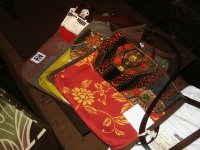 As for the trip itself, it was both pleasant and reasonably productive. We stopped at a yuzen fabric dye and painted fabric decoration workshop, and chatted with the someone who makes pillows, purses, and other fabric-based crafts. Although I suppose these items would be quite expensive if imported in the US, I like the work and would like to try to find a way to make it possible to bring into the US.

The labor involves traditional dying and decoration processes but the look would fit in with contemporary lifestyles. Hiromi bought a purse (pictured here) that has a pretty interesting cut and looks pretty good when worn...

Our first night in Kyoto was a kind of multicourse meal involving fresh yuba, skimmed by hand from the surface of thick soy milk. We had yuba in various preparations, yubadoufu, and other pleasant things. The entire meal was pleasantly sappari, although we decided to tempt fate and order a sort of spring roll made with yuba as the skin and what turned out to be typically Japanese processed cheese inside. This was pleasant, though if I did this back home I think I'd probably be using some camembert or raclette cheeses. 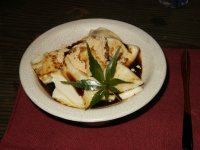 We met up with Sachi, who visited me in Seattle during Golden Week, Sunday afternoon, but not before a breakfast that included a soy milk warabi-mochi. Warabi-mochi are a chewy confection which I think are actually made with kuzu (arrowroot) starch. Hiromi discovered the shop in a guidebook, and when we arrived, we realized it should have been in Fremont, were we in Seattle and if the King County Health Department didn't have an aversion to pets in restaurants. The shop was actually mostly selling dog toys and baked items for dogs, and the cafe was just there as a diversion for their customers. We had two orders of Warabi-mochi, and some Japanese interpretations of the Korean drinks soo jeong-gwa (persimmon punch with cinnamon and ginger) and yuja-cha (yuzu tea). The rest of the short menu was multiethnic and rarely Japanese. The soymilk smoothed out the texture of the warabi mochi and what we had were much creamier than the typical confection by the same name... I suppose that might be meaningless to most folks who don't spend a lot of time eating Japanese sweets, but it's the best I can do to describe it... Our dish was adorned with a maple leaf and dressed with kuromitsu (black sugar honey syrup) and kinako (toasted soybean powder).

With Sachiko, of course, we spent most of our time walking across the Kumo-gawa river toward Gion, eating nibbles at other Japanese confectioners and senbe-makers. We even sampled some usu-jio umeboshi that are typically sold for something approaching JPY 300 each (a shy $3). She had to head off within a couple of hours due to a fairly long train ride back to her home in Wakayama, and, I think, trying to match the schedule of her friends that she had visited Arashi-yama with earlier in the day.

After wandering around in search of an exciting dinner option, we backtracked to Gion and picked a restaurant where we had more tofu and yuba dishes, in addition to some stuffed Kyoto eggplant (almost Italian), grilled mushrooms with butter, salt, pepper and garlic), and some salt-roasted ginnan nuts. We had a nigori-sake (unfiltered) which was slightly effervescent, and some excellent pickled daikon served with a little grated ginger.

Monday, we made a pilgrimage to Del Cook, in Nose, a rustic area in the north end of Osaka. 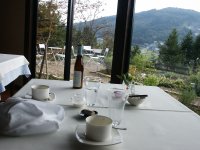 We were perhaps too focused on eating and enjoying the view to take any photos of the food, but it suffices to say that everything was as beautifully presented as the rest of the scenery. We had the fancier of the two available lunch courses, and mine was altered to be suitable for a vegetarian. We started with a small bowl of chopped persimmons served, in my case, with unsweetened yogurt, some black sesame seeds, and, I think, ginnan or similar nuts. A little coarse salt provided a little contrast to the light sweetness. 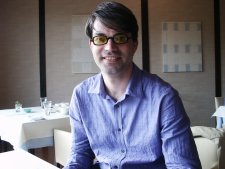 We had a creamy gobo (burdock root) soup with a little bit of milk foam, served in cute little cups and small spoons, providing a bit of an espresso machiatto deception. Some naturally leavened breads made by Del himself provided a nice accompaniment, which we soon devoured and of which we declined an offer for a second serving. The next course was a baby organic leaf salad, served with some charcoal grilled fish for Hiromi, and some similarly prepared Kyoto-sized eggplant halves in my case. Hiromi also had a course of risotto and grilled hotate (scallops), and mine was a similar risotto and some grilled matsutake mushrooms which had been hand gathered by an older woman who operates a similarly rustic Japanese restaurant next door.

Before dessert we had something of a palate cleanser course of black currant sorbet and finely chopped pears in a light syrup. A rustic apple tart was accompanied by chestnut ice cream. 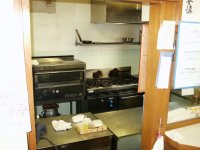 After our lunch, we were able to stop in Del's kitchen and chat a bit. There was no dinner meal planned for the evening, so he was able to talk with more leisure than otherwise, although it was clear he was exhausted. He also gave us a sample of some very nice yuzu mascarpone sorbet which went out on the dessert plates of those in the second seating.

Hiromi and I took a little walk with Del and his dogs, meeting the neighboring restaurant's ducks and walking past a backyard garden. We had a beautiful view of the Nose valley facing down the hill. One of the dogs jumped into a reservoir and swam a bit, then delighted in shaking off the water as close to his human companions as possible. As we returned to the restaurant to gather our things and settle our bill, we saw the obaasan (granny, respectfully) who runs the neighboring restaurant ride up on a motorcycle after apparently running some errands. Del says that she's been known to dive for abalone herself and share the bounty with his restaurant.