Briefly reunited for a couple of weeks during the Christmas and New Year's holiday, Hiromi and I spent most of our time in Vancouver quietly. Most of our previous trips to Vancouver had been rather quick and hurried, and we ended up choosing where to eat without any particular research or care. This time, though, we had the opportunity to do a bit more exploration, and we made some pleasant discoveries.

The exchange rates made even the cheaper dining options a bit expensive. Hiromi's whim to eat some sort of Mexican food led us to a place that made many of Seattle's mediocre chain yellow-cheese laden places seem almost gourmet, and we paid almost twice as much for the privilege. But we also had plenty of favorable experiences.

We met up with some local members of eGullet.org, a food community site that I participate in, at Cru, a Pacific Northwest focused restaurant on West Broadway. We decided to mostly entrust the chef with decisions on the food, and they made one or two dishes just for my benefit (I was the only vegetarian) that weren't on the menu.

I can't recall a single misstep in the menu. Mostly simple, elegant dishes focused on the ingredients, the food was pleasant and carefully prepared. I was particularly happy with a mushroom risotto garnished with some pea sprouts. We had a nice Syrah and some complimentary sparkling wine. The interior had a cozy-but-contemporary feel, and felt very relaxed. It resembles Seattle's Veil in some ways, but has perhaps a bit more comfortable atmosphere. 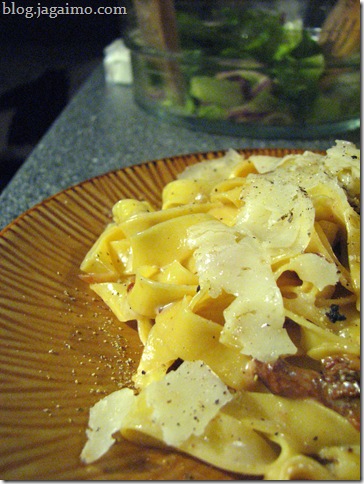 We stayed in a little Yaletown studio apartment, which gave us the luxury of eating at home reasonably often. We kept most of our meals simple, constrained as we were by a minimalist pantry and a more basic set of kitchen equipment than I have at home, but most everything we produced worked fairly well. I carried some basic magic from my pantry in Seattle: olive oil, Spanish paprika, a little argan oil, soy sauce, mirin, salt and a pepper mill. We had a little salad with macadamia nuts and dried cranberries, along with an improvised version of my yuzu dressing.

One night we had a simple wide noodle egg pasta with some truffled sheep's milk cheese, shallots, cream, and some of the last possible chanterelles of the season.

I had brought a couple of varieties of crackers with me from Seattle, mostly because I wanted to make use of them before they lost their charms. During our stay in Vancouver, we went cheese hunting on Granville Island, and came home with an excellent raw milk Brie de Meaux, a truffled sheep's milk cheese from Italy, and some soft nice chevre from Salt Spring Island. The raw milk Brie was spectacularly flavorful, with an almost grassy, pasture-like aroma... I really haven't ever had a nicer one. I'm not sure who they bribed to make it possible to sell in Canada, but we delighted in knowing we were eating something that's essentially forbidden in the US. Even when I was living in Germany, I don't think I ever managed to find a raw Brie. The truffled cheese was also very nice, and the chevre worked particularly well as a stuffing for sweet dates.

Hiromi had a craving for cookies on Christmas, so I made some thumbprint cookies with a black currant jam.

We had a quiet evening on New Year's Eve, as we had planned a special dinner at West in lieu of attending some sort of New Year's Eve party.

We had some nice pre-dinner cocktails, though thanks to our indecision on the drinks the first course or two passed before we really moved on to the wine. We had sort of imagined we would order a B.C. wine of some sort, but when we asked for something in the Syrah/Shiraz world, the waiter steered us toward the French or Australian options, so we gave up on drinking local in favor of an excellent French Syrah, priced fairly reasonably at around $85.

Hiromi had the West Tasting Menu ($129) and I had the vegetarian ($89). My amuse, a truffled cauliflower pureed soup, served in an espresso-like cup for sipping, was a pleasant way to start things off, and Hiromi had some little seafood treat that she was quite pleased with. We both had a beautifully presented marinated beet dish, in which a soft chevre was sandwiched between slices of beet, brightened by a simple vinaigrette and pine nuts.

Hiromi's next course was seared foie gras and duck confit and pear salad, and I had a shaved truffle-heavy frisee salad sprinkled with some translucent crispy wafers of unspecified origin. The truffles were almost overpowering in my salad, but I still ate every bite.

Hiromi was thrilled by a seared scallop dish with a delightfully rich-yet-refreshing cilantro sauce, which she thought would be enjoyable even by people hostile to cilantro. The vegetarian course also featured a bit of cilantro, adorning a surprisingly endearing ginger and tomato braised artichoke.

The next course, a fillet of sturgeon for Hiromi with fennel jam and artichokes, and a bell pepper confit risotyo for me. Both solid, nicely executed dishes.

The only misstep was in the fifth course, and the same error affected both of us. Hiromi received a lamb dish, and I had an "open raviolo" with butternut squash. Both of these dishes were accompanied by some unspecified savory foam and some sauteed wild mushrooms, and that's where the disappointment hit us: somehow they had been oversalted. When eaten together with another component of the dish, they were tolerable, but they were too salty to be enjoyed on their own merits.

The cheese course and dessert course took our minds off the imperfect 5th course. We both had a dark molded mousse (or "Marquis") between two rectangles of chocolate, served alongside a vanilla tapioca. For me this triggered a bit of nostalgia, but Hiromi has little to no experience with tapioca puddings, so it was more of a novelty for her.

We had a little grappa, one serving of a local dry, but slightly harsh B.C. product, and a fruity and memorable Alexander Platinum.

Service was not as flawless as our previous experience at Lampreia in Seattle, the only comparable meal we've had at a restaurant. The server was occasionally distracted, perhaps having too many tables to accommodate, so it took several attempts before we could order our drinks; of course, one was due to a bit of indecision after learning one choice wasn't available that night. But I was pleased to have a carefully constructed vegetarian tasting menu, an option that wasn't on the table at Lampreia. For that, we'd need to go somewhere like Rover's.

Hiromi's comment, after trying West, was that Lampreia seemed to delight in simple flavors occasionally constructed from impossible-to-imagine components such as a cracker made almost entirely from tomatoes, ravioli made with skins constructed from pineapple, and other fanciful pieces. On the other hand, in West's cuisine, every ingredient was recognizable; the effort seemed spent mostly on carefully composed, sometimes complex sauces with surprising, but not jarring flavors.

I've done most of my extravagant dining in Japan, in ryokan (Japanese inns), where the food is an elaborate but essentially rustic experience. I've not really done much in the way of true kaiseki, except some scaled-back versions in Kyoto. But I'm actually probably more familiar with the conventions of Japanese style multicourse dining than I am with the French tradition. I lived in Germany as a student with no money, so "fancy" dining meant going to a restaurant serving burgerliche Kuche and getting bland croquettes with overcooked vegetables, or perhaps a very, very buttery omelet.

I'm still excited by the experience of a place like West or Lampreia, but part of me wishes dinner included a Japanese bath and a place to sleep.

We got home early, around 9:30, thanks to our early seating. I think we were up until around midnight, because I recall hearing shouting and fireworks outside, but we weren't part of the revelry. 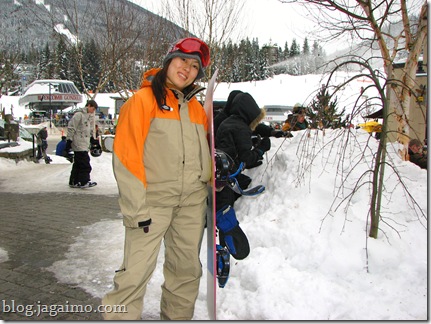 It's probably a good thing we had an early night. Although we were awake enough to hear the revelry at midnight, on New Year's Day we planned to wake up unusually early so that we could take Hiromi on a day trip to her first home in Canada, Whistler, B.C.

We haven't been to Whistler since Christmas 2003, when Hiromi made her first visit to the US to see me. Somehow I convinced myself to take a lesson in snowboarding, and then proceded down the mountain very, very slowly the next day. This time, I had a little cold, and my knees aren't what they once were, so I decided to opt out.

I spent most of my day drinking very mediocre coffee and hacking code on a pet Ruby on Rails project. When Hiromi was done for the day, we stopped at the home of Fusaki Iida, a snowboarder/writer/teacher that she knew when on working holiday in Whistler earlier in the decade.

My cold got particularly nasty at night. It was bad enough that, even though I'm sure Hiromi was completely worn out from snowboarding by the end of the day, she ended up making a run across the street to the pharmacy and took over making dinner while I collapsed on the bed, still in my wool coat

By the next morning, though, I felt much better... I was a bit congested, but not anywhere near the condition I went to bed in. The massive doses of hot, artificially cherry flavored cold medicine did the trick. Or maybe it was only a 24 hour bug.

During the trip, we also met a couple Hiromi's friends, from the days when she was living in Vancouver. We had coffee and desserts at Ganache down the street from us, and chatted for far longer than planned back at our apartment. We met another friend at Caffe Artigiano, which has decent coffee too.

A bit of good news arrived just after Christmas... After 4 months, the United States Customs and Immigration Service finally acknowledged receipt of our petition for Hiromi's permanent residence status. That particular step normally takes about 2 weeks, but things have been unusually sluggish. The attorney sent off the next batch of paperwork for her visa, which was acknowledged about 3 weeks later. We don't know how long it will take until Hiromi's visa is approved, but it's been a long process. The spouse visa is supposed to be done within three months or so, but can only be filed after the first petition is acknowledged. We're now expecting the permanent resident petition to be approved before the actual visa application, which adds some complications to the process.