Ganmodoki, a deep-fried tofu dumpling, are kind of a staple of Kyoto-style tofu cuisine, and find their way into nimono, among other things. I’ve made them before, but this time, I took a slightly different route. 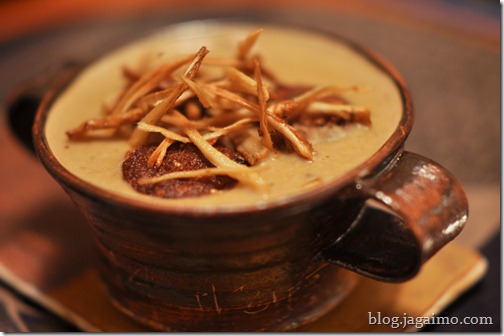 Inspired by a crazy cheap deal on burdock root at Rising Sun Produce in Seattle’s International District, I decided to emulate a soup Hiromi and I tried years ago at Del Cook, a French restaurant in a rural extension of Osaka in the Nose valley, made with Japanese burdock root, called gobo.

I took bunch of burdock roots and roasted them in the oven with a bit of salt until the burdock softened up a bit, probably around 20-30 minutes. Then I broke out the blender and busted up the roasted roots with some milk and vegetable soup stock. The process took a bit longer than I would have liked, but even after all that pureeing, I discovered that the texture of the mixture was far chewier than I’d want in bisque-like soup. At first, in denial, I tried pressing on, seasoning the liquid with salt and some “Balinese Seasoning” that I first discovered at World Spice Merchants a few months ago, cooked in a bit of butter. But I realized chewy wasn’t going to work for this, and I needed to find some workaround.

So I pushed the liquid through a sieve, extracting as much as I could manage. I realized I had a lot of burdock fiber that might still be put to good use. If we eat all this roughage in kimpira-gobo, there must be some way to make it edible, right? That’s when ganmodoki came to mind. I got myself a block of momen-doufu, medium-firm tofu, broke it up, and mixed it with the solids from my sieving efforts, along with black and white sesame seeds. The ratio was probably about 1:1 burdock fiber and tofu, without considering the seasonings. Even before I fried them, the mixture tasted pretty nice, so I had some confidence that things would work out. The chewy texture that had caused me consternation in the soup was nicely mitigated by the custardy texture of the tofu, and in a solid form, whatever fiber in the texture remained was far less disconcerting. 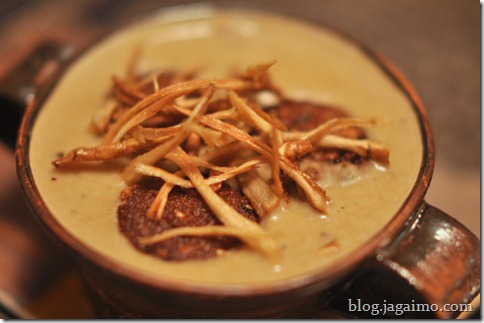 Using a couple of spoons, I made small balls out of the solids and placed them into the deep fryer.

I was surprised at how deeply the ganmodoki browned. There’s a touch of sugar in the spice blend I used, and probably a reasonable amount of sugar in burdock root itself, but I have never had this kind of result when making more conventional ganmodoki. Even deeply browned, the little balls were pretty tender inside, and just barely held together.

I modified the soup from my original plan, incorporating some pureed cannelini for protein, so in many ways, save for my use of burdock root in place of the cheddar in the version of the soup that was recently featured in Seattle’s Japanese newspaper, Soy Source, it was not a huge departure from that. The roasted burdock totally transforms the flavor from rich to earthy, so they’re certainly not identical. Certainly, the little tweaks are proof that you can make very small changes to a dish and turn it into something nearly unrecognizable. The white beans contributed protein and some iron to a dish that would otherwise best serve as a small side dish, making it a more substantial part of dinner.

To serve, I ladled the liquid into onion soup bowls, and placed three pieces of the “gobodoki” (half gobo, half ganmodoki) on top. I was convinced Hiromi would groan at my bad Japanese wordplay when I unabashedly mashed two unrelated words together, but she embraced the name unreservedly.

To finish, I topped the soup with deep-fried, salt-sprinkled burdock root. We served it with some gnocchi alla romana, which I’ll try to feature in a future post. A little bread and a nice green vegetable side dish would make a nice alternative.

I really like the Balinese seasoning spice mixture that in my cream-style soups. I have no idea if it even resembles anything actually used in Indonesia, but that’s beside the point; the dishes I’ve made with it so far simply aren’t indigenous to any particular country, so I feel free to do whatever tastes good. I dig the shallot, lemongrass and peanut base notes that it provides in anything creamy. There’s a little cinnamon, white pepper, and chili in there, and a hint of dried ginger, so it adds a little magic to anything it touches. 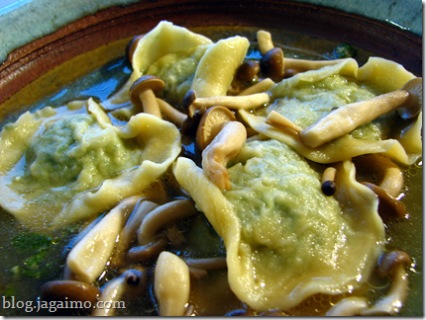