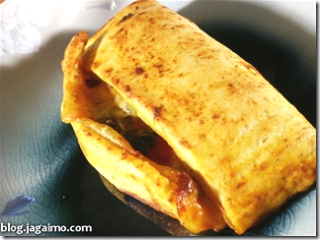 I keep craving savory pies. This never seems to translate into me making a savory pie. I never go out for savory pies, except the occasional piroshky in the Pike Place Market.

Somehow, I finally overcame inertia and made this nice, if somewhat flawed pie, and on a weeknight to boot.

The pies would have benefited from Hiromi's superior crust-making skills, but I managed to throw together a passable short crust in about an hour. The filling consists of some canned tomatoes, chickpeas, and some salt-rubbed kale, along with garlic, and some onions sauteed in garam masala, mustard seeds, and turmeric. I think some chilies went in there but it's not incredibly spicy; it's just a nice moderately complex flavor.

I also added a bit of mozzarella to the pies before folding them. That's a great cheese for this purpose, because it adds a lot of texture, doesn't compete with the flavor too much, and doesn't overload the pies with so much fat that the butter and cheese combination becomes overwhelming.

It's rather difficult to resist the temptation to overstuff these. However, it's a bad idea to put too much filling in there, because it becomes rather hard to seal the pies, and then all sorts of leaks want to happen. Yeah, I fought the leaks, and sometimes the leaks won.

I served a couple of small pies with a little broccolini sauteed with garlic, tossed with parmesan and crushed red pepper flakes, topped with a fried egg. But let's just say I was too hungry to stop for a picture...